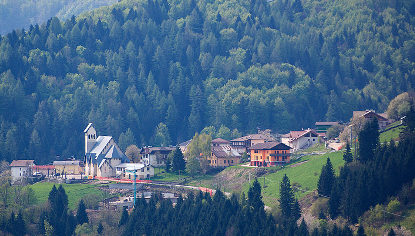 Just ten people in the 380-strong population of Stoccareddo are not called Baù. Photo: Wikicommons

The Baùs meet every three years as part of a ritual to reunite those who emigrated from the town of 380 with those who stayed.

Name-sharing counterparts from as far afield as Brazil and Australia returned to their origins for a day of celebration that begun with Mass.

A book entitled 'Baù in Photography: 100 years of life, migration, much suffering and dignity', was also presented. The book contains photographs taken of various Baù families between 1875 and 1975.

Stoccareddo is located 3,100ft up in the Italian Alps and is thought to have been first inhabited by a Danish family by the name of Baù, which in German means "building", some 800 years ago.

Just ten residents have a different surname. All apart from three footballers who play for the town’s side have the same surname and have had to adopt the nicknames of national players, from Supermario to Nocerino, to distinguish themselves.