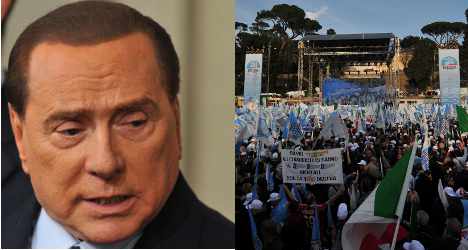 Berlusconi’s fall from billionaire playboy to convicted criminal has failed to turn the electorate against him.

In the opinion of Alexander Stille, the author of The Sack of Rome: How a Beautiful European Country with a Fabled History and a Storied Culture Was Taken Over by a Man Named Silvio Berlusconi, the secret of his success lies in the country's many tax evaders, as the former prime minister would be "the last person to call the treasury police and hunt them down.”

He told The Local that the scandal-hit politician therefore relies on “a constituency that lives on illegality.”

“Italy has the largest concentration of small businesses in Europe. These survive in part by increasing their profits by cheating their taxes,” he adds.

“The Italian economy is split in two: those who are self-employed and use creativity in their tax returns and those who are paid through big companies and have their taxes taken out automatically. The second category doesn’t tend to vote for Berlusconi.”

Tax-evaders aside, others say Berlusconi also attracts those who, while happy to pay their share of tax, would like to pay less.

“If your interests are lower taxation and not paying tax on your first home, he represents very practical policies,” says Alberto Nardelli, co-founder of websites Tweetminister and the politics-focused, electionista.

But The Knight, as Berlusconi is known, has also thrived on the back of others' setbacks, including the failure by left-wing parties to put together an articulate alternative, Nardelli adds.

“His success is to do with the weakness of the left over the past 20 years."

This makes it easier for leader of the People of Freedom (PdL) to garner vote despite his own failures.

“In the 2001 election, people voted for Berlusconi because of his political programme, in 2006 that was much lower,” says Giovanni Orsina, author of The Republic after Berlusconi: Some reflections on historiography, politics and the political use of history in post-1994 Italy.

Orsina adds that between 2001 and 2006, Berlusconi voters switched from hope to fear, in that people would vote for him, not because of what he could do, but out of fear for what the left would do if they won.

This overall shift away from focusing on politics has hugely benefitted Berlusconi, according to Nardelli.

“Over the past 10 to 20 years the political culture has dropped in Italy. It has become a shallow, populist debate, and Berlusconi is the master of that,” he says.

Berlusconi's media empire has also played a significant role, enabling him to pull in the voters, something Stille says has had a lasting impact.

“He was already a kind of 'national celebrity' and represented a model of life that many Italians found attractive through his TV shows, a carefree life of material wealth and advancement,” Stille says.

“There was a whole wealth of Italians raised on the values of his TV stations.”

His enduring success is also due to the poor state of Italian institutions, argues Orsina.

“In the past 20 years Berlusconi has been successful in representing a part of public opinion which considers itself right-wing and has not trusted Italian institutions,” he says.

“When he [Berlusconi] says the judges are biased, there is a substantial part of the population that believes him. The judges are not always particularly good at demonstrating this is not true, for example a judge [involved in Berlusconi’s tax fraud case] gave a newspaper interview before the ruling had officially come out,” Orsina says.

Picking out Berlusconi for investigation has also helped his political cause, according to Stille.

“His voters believe that all politicians cheat and steal, so why is he being singled out? It resonates with their experience of a distant and unresponsive state…it’s a war of us against them,” says Stille.

But this disillusionment with institutions goes beyond the courts and hits the political sphere, which Nardelli says could damage Berlusconi’s career.

“Young people find it harder to find jobs and emerge career-wise. They have a sense of frustration in politics so will not support the two main parties,” including the PdL, he says.

They will instead turn to the Five Star Movement (M5S) or the Left Ecology Freedom (SEL), although Nardelli says many are in fact not voting at all.

Despite a conviction at Italy’s highest court, the skilled stageman will continue to attract voters through his strong rhetoric against his legal and political opponents. That is until Italy’s institutions and political parties are revamped, the experts say.