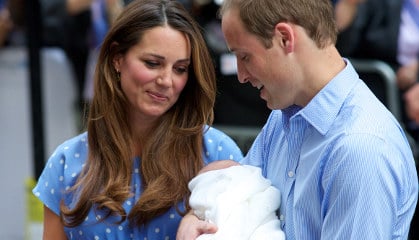 Italians are keen to get a glimpse of Prince George. Photo: AFP/Andrew Cowie

A travel agent in Rome told The Local the influx in bookings to the UK capital might be something to do with the recent arrival of Prince William and Kate Middleton's firstborn, Prince George.

“London is a popular location all year round for Italians, but this year they are interested in the royal baby too,” Silvia Fornari at All Seasons Travel Agency said.

Despite the popularity of the new royal, Fornari added that Italians have also been cutting back on their holiday time, and so a few days in a capital which is “fascinating, with something to do for all the family” is the number once choice.

“Italians love London, there is something for everyone,” she said.

Catania, in Sicily, is the second most popular place for Italians to fly to over the holiday weekend, while the island’s capital, Palermo is the fifth.

“Sicily is always very popular; people fly to Catania to visit Taormina, which is close by,” added Fornari.

Roma, Milan and Trapani, another Sicilian town, were also among the top 20 destinations for the holiday period, which begins with a national holiday on August 15th.

Italians were as excited as the Brits about the birth of Prince George, with more than 18,000 tweeting about his arrival.

An Italian pizzeria owner, living in the UK, also created a special pizza to mark the occasion.