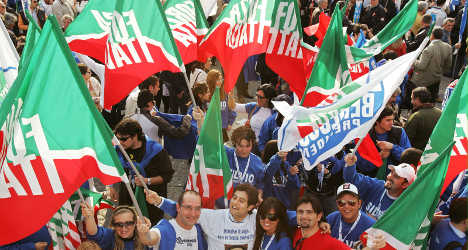 “Still in the field for Italy” posters, first previewed in Milan, will be rolled out across the country, the Berlusconi-owned newspaper Il Giornale reported.

The posters will also appear in service stations, targeting Italians on the road for the national holiday, Ferragosto, on 15th August.

Those already at the seaside will not miss out, however, as planes carrying “Forza Italia” and “Forza Silvio” signs will fly above the country’s most popular beaches.

The campaign comes just days after the billionaire voiced his intentions to re-establish the party.

Although the sentence, if confirmed by the Senate, will see Berlusconi banned from politics, he is still viewed as a political leader by his supporters.

In 2008, the party evolved to become the People of Freedom (PdL) party, although in 2011 Berlusconi was forced to resign as prime minister when Italy’s economy reached crisis point.

A return to Forza Italia therefore harks back to Berlusconi’s more successful years in politics.