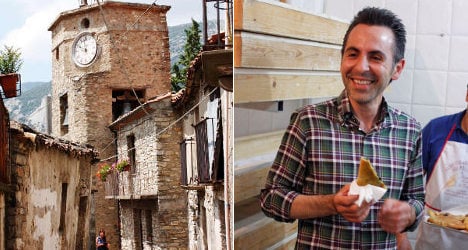 “It's not in our character to sit and wait,” says Antonio Cersosimo, the mayor of San Lorenzo Bellizzi, a small village with 600 inhabitants in Calabria, southern Italy.

Cerosimo is of a slight build, with graying hair neatly combed back and a constant gentle half-smile on his face. The mayor was born here, as were his parents and grandparents. He is 37 years old, full of energy and fiercely passionate about  his land.

As we walk along the narrow village streets, constantly saying and waving “Ciao” left and right to the passing locals, he talks about the future. ”Knowing that in a few years the village of San Lorenzo Bellizzi might cease to exist is not easy, ” he says. “We have to do something and try to save it. We are die-hards who don’t give up easily!”

Cersosimo and his team have a mission: to bring the centre of the old village back to life. They do not want to wait for government money, which might never arrive.

Instead, they hope to attract private buyers who will restore the lovely stone houses to their former glory. The price tag is kept deliberately low – €1500-3000 for a house of 45-50 square metres.

CLICK HERE to view a photo gallery of the town

San Lorenzo Bellizzi is surrounded by the dramatic mountains of the Pollino National park, the biggest park in Italy. It offers visitors tranquility, stunning nature walks and hearty local cuisine.

Very little is known about the origins of San Lorenzo Bellizzi, however, there is an ancient Greek document dating back to 1141 that mentions the “houses in Bellizzi”. Life was never easy in this picturesque hamlet in the mountains but Sanlorenzani, as the locals are called, have always being known for their true grit: over the centuries of various feudal tenures they stood their ground firmly demanding from their rulers “give us land or… land”.

That tenacity certainly runs in the blood, I thought, as I listened to Antonio Cersosimo’s stories about the past. In the 1940s the village was a typical example of the hardships faced by southern Italians: the only road connecting San Lorenzo with the world was a centuries-old mule track. There was no electricity, no sewage.

The hard-working and proud Sanlorenzani had had enough. In March 1949 they all gathered on the central piazza armed with metal bars, pitchforks and hoes, shouting “We want water, electricity and a road!”

They surrounded the municipal hall and sent the incompetent employees home. A ruling committee was elected by the revolted folks to deal with the central authority. Their endurance and determination paid off again: a road was built, water and electricity eventually arrived.

As years went by the young people in San Lorenzo moved to the greener pastures of bigger cities and richer foreign shores. For the last 40 years, the historic centre has remained unoccupied.

A few years back the old byzantine church collapsed during an earthquake. The locals took the matter in their hands (yes, once again) and built a beautiful panoramic viewpoint plaza with the remains of the church bell tower at the back.

However, about 60 traditional stone houses that were transferred into the ownership of the local council are slowly crumbling away as there is no money for restoration. So this month the local authority will put 25 old stone houses up for an auction for the price of a motorbike.

Such initiatives are not new in Italy. In 2008 Vittorio Sgarbi, the mayor of Salemi, a town in Sicily, announced the give-away of old houses to anyone who had money and desire to restore them. The price tag was… €1. With his high profile and connections in the art world he managed to attract some celebrities, both Italian and international, who were willing to invest in doing up the forsaken properties.

However, the initiative seems to have hit bureaucratic rocks. It also did not help that the mayor resigned last year after alleged dealings with the mafia within his administration came to light.

San Lorenzo Bellizzi’s initiative is more transparent and low profile: you will not see articles about it splashed across the front page with photos of celebrities. The auction will be advertised in Italian on the municipality website, so it is unlikely that there will be many foreigners flocking in, which means the prices will remain low.

The sale paperwork is standard and involves paying a buyer’s fee of around €700 to the commune.

The restoration must start six months after purchase and finish not later than two years afterwards.

“We want San Lorenzo Bellizzi to have a future,” explained to me Cersosimo. “We want people to live in the old village centre and enjoy the many genuine things that this land has to offer”.

Anna Lebedeva is a freelance journalist living in Italy. She runs the website Green Holiday Italy.