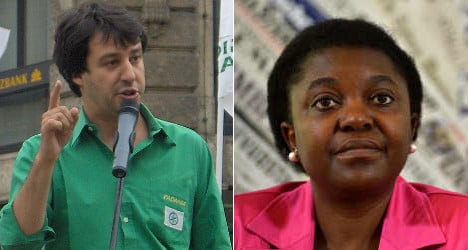 In a Facebook post published on Sunday on his campaign page, Matteo Salvini, an MEP and member of Italy’s far-right Northern League party, takes issue with a suggestion by Italy’s Integration Minister Cecile Kyenge that the crisis in Egypt will lead to increased immigration to Italy.

The offending post, which on Monday morning had 354 shares, reads: “Mrs Kyenge says that ‘the crisis in Egypt will mean an increase in immigration to Italy’ (genius!) and that ‘a law on IUS SOLI [a law guaranteeing citizenship to those born in Italy] will be made and will go ahead.’ As if to say ENTER, there’s room for EVERYONE in Italy! Why doesn’t Mrs Kyenge go and be a minister in Egypt??”

The post has already attracted hundreds of comments, mainly in support of the MEP. The remarks were apparently made in response to an interview with the Italian news website Qn, Il Messaggero reported, in which the minister said the crisis in Egypt will “cause an increase in immigration towards Italy and the government is reinforcing its reception centres: after [the violence] in Libya and Syria, the violence in Egypt will push many people to flee in search of a future.”

“It’s necessary to revise the procedures fixed by the Dublin Convention based on which you can request asylum only in a country where they have landed,” the minister said.

This is not the first time the Northern League party has come under fire for inappropriate comments aimed at Cecile Kyenge, who is originally from the Democratic Republic of Congo and Italy's first black minister.

In July, Kyenge was compared to an orangutan by a leading member of the Northern League, deputy speaker of the Senate Roberto Calderoli, who later claimed he had not intended to be racist.

The minister also had bananas thrown at her during a political rally and one Northern League councillor even called for her to be raped, sparking an outcry and his expulsion from the party.

Earlier this month, Kyenge said she would not attend a conference organized by the Northern League party after a torrent of racist abuse from members of the anti-immigration group.