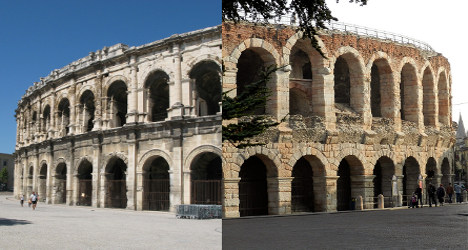 The Roman arena in Verona is one of the city’s most famous and unique tourist attractions, luring hundreds of thousands of visitors from all over the world each year.

Unfortunately, it just wasn’t memorable enough for the publishers of a tourist guide to the city who last week managed to confuse the monument with another Roman arena hundreds of kilometres away.

Entitled ‘Welcome to Verona’, the 150-page guide features a photograph of the famous historical arena in Nîmes in the south of France.

Although both amphitheatres date from the same period of history, they don’t appear to have much in common.

The amphitheatre in Verona is in fact the third largest in the world after the Colosseum and the arena in Capua, and could hold up to 30,000 spectators, almost double the capacity of Nîmes, which can only hold up to 16,300.

Italian daily Il Fatto Quotidiano even points out that the publishers failed to notice a tell-tale French brasserie pictured in the corner of the photo.

But this photographic error was just the tip of the iceberg, according to the paper.

The gaffe-ridden guide, intended to promote the commercial and cultural activity of the city, also claims that a statue known as the ‘Madonna Verona’ is “enhanced by a Roman statue also known as the Berlina”. The two are in actual fact two separate monuments, not to mention the fact that the ‘Berlina’ is not even from the Roman period.

At another point the guide even mentions “the arena and the amphitheatre” as if they are two separate things.

The mistakes have proved expensive for the publishers who have now promised to publish a corrected version of the guide, discarding the 12,500 copies which have already been printed.