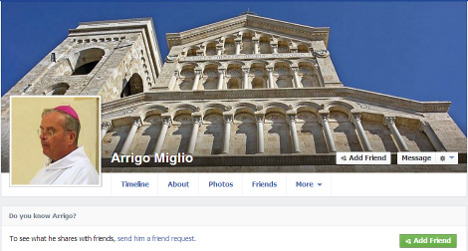 Churchgoers in the town of Cagliari in the southern Italian region of Sardinia could scarcely believe their good fortune when they received a Facebook friend request from their emulated Archbishop Arrigo Miglio.

The profile, created earlier this month, has since been flooded with messages from well-wishers congratulating the archbishop on his new-found interest in social networking.

“Your excellency, it was a great surprise to find you on Facebook, I will always carry wonderful memories of the many moments I shared with you until your consecration. Thanks for befriending [me] and good job!” read one of the posts on his Facebook wall, Unione Sarda reported.

But their delight didn’t last long. Within a few days the church was forced to release a statement denying that the 71-year-old churchman’s association with the social networking profile.

“This is [a notice] to say that a profile has appeared on Facebook under the name Arrigo Miglio. Such a profile is false and the work of an unknown person.”