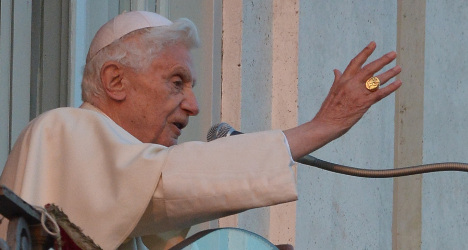 “God told me to resign." These were the words reportedly used by the former pope Benedict XVI a few weeks ago when he explained his decision to stand down as pope, the Catholic news agency Zenit has claimed.

“Almost six months after the announcement that shook the world, Ratzinger’s decision to retire is still cause for reflection and questioning,” Vatican Insider quoted the Catholic news agency as saying.

“Someone had the privilege of hearing the reason for this decision from the emeritus Pope’s lips. Despite his secluded lifestyle, Ratzinger does indeed grant – sporadically and only on specific occasions – some very private visits.”

On February 11th, Pope Benedict XVI became the first pontiff to resign in more than 700 years, in a move that shocked the Catholic world. Following his resignation, a conclave of cardinals elected Pope Francis as his successor in March.

At the time, the pontiff said his decision to stand down was for "the good of the church".

In the latest revelation, the unknown source claims his decision to resign had been the result of a “mystical experience” which lasted for a few months, during which his yearning for a unique and direct relationship with God increased.

The source added that the ex-pontiff said the more he observed the “charisma” of Pope Francis, the more convinced he was that his decision was the “will of God”.

Since Pope Francis was elected in March, the pontiff has experienced a surge in popularity. Earlier in July, the pontiff was elected 'Man of the Year' by the Italian edition of Vanity Fair, appearing on the society magazine's front cover accompanied by the headline 'Brave Pope Francis'. Later that month the pontiff was even crowned "most influential Twitter leader" when his follower count topped 7 million with an average of 11,000 re-tweets per tweet.