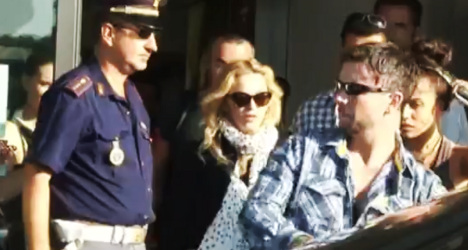 Screengrab of a YouTube video showing the star arriving at Ciampino airport.

The Italo-American star, who celebrated her 55th birthday last week in France, was spotted arriving at the fitness centre at around 9pm on Wednesday evening.

Dressed in a black dress, dark glasses and flanked by bodyguards, the singer was cheered by dozens of fans as she entered.

The new centre, which according to the website includes a state-of-the-art gym, a spa, a sauna, steam rooms, pools, jacuzzis and an espresso bar, is located in the historical centre of Rome near the Anfiteatro Flavio.

According to Italian daily Il Messaggero, the centre had been set to open in May, but the opening had been delayed due to bureaucratic problems. It is now expected to open in October.

“Our clubs are a work of art in themselves designed with extraordinary style and outfitted with the finest materials,” according to the fitness chain website. “They deliver a clean, modern, and refreshing look and feel. They are designed for members who expect to work out hard and then relax in luxury.”

On Thursday the diva was expected to return to meet the centre staff, which include some of Italy’s top personal fitness trainers.