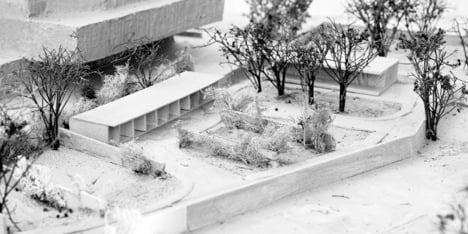 A model of Switzerland's sex boxes. Photo: City of Zurich

Sex boxes, already in place in other European countries, are garage-like structures where clients can drive to see a prostitute. They are seen as a way of moving the sex trade off city streets and regulating the industry.

Di Mattia said that it was necessary to cut through the controversy and the “prudes and hypocrites” in politics, moving ahead with the plans to install sex boxes.

The mayor was speaking at a discussion on partially repealing the 1950s Merlin law, which made brothels illegal.

“My impression is that citizens are with me and not with the prudes,” the mayor said.

But not all citizens are keen to see what has been described as a sex drive-through built in their town.

Di Mattia should be focusing on traffic, tourism and schools, not prostitution, Aliano added.

But the mayor has the support of the Italian Radicals party.

Roberto Di Masci, president of the Radicals in Abruzzo, said the initiative can be “a solution to sex on the street; an easy and immediate response”.

“The road to legalizing prostitution is long; the sex boxes can be the first significant step in recognizing a profession that is always despised but in great demand,” he said in a statement on the party website.

Last week a set of nine sex boxes were unveiled in the city of Zurich, Switzerland.

Due to open on August 26th, the site has been set up so that drivers cruise past up to 40 prostitutes, negotiate a rate, and then drive to one of the boxes.

The Zurich sex box site will be open from 7:00pm to 5:00am and staffed with social workers and security officers, while the boxes themselves are equipped with panic alarms hooked up to the police.