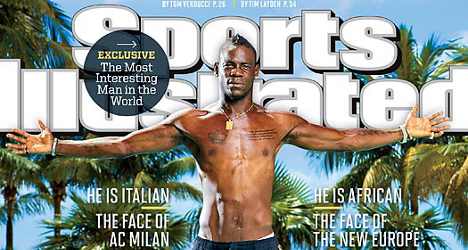 Who is Mario Balotelli?

A 23-year-old Italian football star, Super Mario is a striker at AC Milan and plays for the national team.

This week US magazine Sports Illustrated put Balotelli on the cover and named him "most interesting man in the world" and “the face of the New Europe”. He was hailed by the magazine as the best young striker in football, friend to popes and prime ministers, but also described as “a red card waiting to happen”.

Has he always been so famous?

His popularity grows with each goal he scores, but Balotelli did not always live a life of fame and fortune. He was born to Ghanaian parents in Sicily, but put up for adoption at an early age.

He was taken in by Silvia and Francesco Balotelli and grew up in the Brescia area in the Lombardy region.

As an infant he suffered life-threatening intestinal problems, but despite such difficulty he was playing football by the age of five.

Where did his career go from there?

After a humble career with the local parish team, he went on to play for the Lombardy football club AC Lumezzane and made his debut at the age of 15. A few months later in 2006 he was signed by Inter Milan and began playing for their under-16's team. At 17 he was already playing for the club’s first team.

But despite being one of Italy’s up-and-coming football greats, Balotelli wasn’t allowed to play for the national team.

This is because under the country’s law, because his birth parents were immigrants he wasn’t allowed to gain citizenship until he was 18.

Yes. He was granted Italian citizenship the day after his 18th birthday and just weeks later Balotelli was scoring goals for the national under-21's side.

But he soon made use of his new passport and was signed to Manchester City, where he spent three seasons.

He returned to Italy earlier this year to play for AC Milan and continues to score goals for his national team.

What’s he been up to off the pitch?

Balotelli has been branded a bad-boy by the press, with reports ranging from shots being fired from a car while out in Milan to alleged meetings with mafia mobsters. He received a red card for high-kicking a player, gave his Bentley to teammate, and hosted a firework party which ended with his bathroom on fire.

Since returning to Italy, Balotelli has tried to tone down his reputation somewhat. Earlier this month he appeared in a video apparently playing the Italian national anthem on a piano.

But he still has the occasional fall from grace, such as being fined for smoking on a train en route to play against Fiorentina.

But Balotelli is still a friend of the Pope?

The striker met Pope Francis along with the Italian and Argentine teams ahead of their friendly match in Rome this month, although it's unclear whether they’re good pals.

Ahead of the meeting Balotelli was asked what he would say to the pontiff, and replied: “I’ll tell him what I think”.

While not one for politics, he did invite US President Barack Obama to a football match on Twitter.