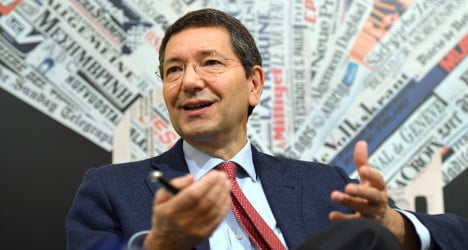 Ignazio Marino reacts during a press conference on April 12th at the foreign press club in Rome. Photo: Gabriel Bouys/AFP

Ignazio Marino was appointed mayor of Rome in June, ousting Gianni Alemanno, his former neo-fascist predecessor in a landslide victory. A few months on, however, and the sweet smell of success appears to have worn off.

According to Italian daily Corriere della Sera, the politician was disappointed by his €4,500 pay cheque for his first month in office, provoking a backlash from Italian politicians.

“I get home at midnight – nothing glamorous [about that] – and wake up at six in the morning,” the mayor told La Repubblica last week. “We manage billion-euro budgets and have enormous responsibility.”

CLICK HERE to read The Local's profile of the Ignazio Marino, one of our Italian faces of the week

The National Association of Italian Municipalities (ANCI) chose not to comment, saying its job is to “address the problems of towns, not individual citizens” and because “everyone knows, or should know, before they present themselves as a candidate what the employment conditions are.”

Elsewhere in Italy, Giuliano Pisapia, mayor of Milan, took a voluntary pay cut from €5,600 down to €3,600 at the beginning of June and Matteo Renzi, Mayor of Florence, earns €4,300 per month.

Perhaps unsurprisingly, the mayor’s harshest critic was his predecessor Alemanno. “As families struggle to make it to the end of the month and unemployment increases, Marino’s request is incredibly inappropriate,” he said.

“I am continuing the collection for @ignaziomarino, who wants a pay rise in the middle of the [financial] crisis. Why didn’t he say so in the electoral campaign?” the politician tweeted on Wednesday.