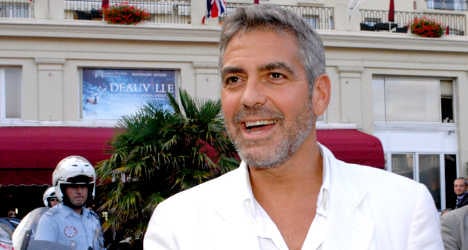 George Clooney will be at the opening of the film festival. Photo: Efloch/Wikimedia Commons

George Clooney and co-star Sandra Bullock will rock the red carpet on the opening night, kicking off the festival with the hotly anticipated Gravity, a 3D sci-fi thriller starring the pair as astronauts.

Gravity, a harrowing space drama about a fight for survival when a debris shower destroys a shuttle, is Mexican Alfonso Cuaron's first work since Children of Men seven years ago, and promises to leave viewers gasping for air.

The film is one of several hellish tales at the festival, which features the return of the family as the vessel for social, political and economic crisis, from child abuse and abductions to absent fathers and marriage breakdowns.

The 53 films screening reflect a "dark and violent reality", festival director Alberto Barbera said in Rome last month as he unveiled the line-up.

"Filmmakers are not giving any signs of optimism or a way out," he said.

Five of the 20 flicks vying for the coveted Golden Lion prize hail from the United States, including the reportedly gruelling Parkland, Peter Landesman's re-creation of John F. Kennedy's assassination through the eyes of those battling to save him.

David Gordon Green's Joe, a brutal drama starring Nicholas Cage as an ex-con who becomes an unlikely role model for a homeless child, runs against Kelly Reichardt's Night Moves about eco-activists plotting to blow up a dam.

And James Franco fans will be watching for Child of God, an adaptation of a Cormac McCarthy novel about a cave dweller who rejects the social order.

The large US presence in competition is "a sign of the vitality and richness of American cinema," Barbera said, though "the real novelty is represented by the UK films. We're living in a period of great revival for British cinema."

Among them, Stephen Frears – director of The Queen – unveils the true story of Philomena, starring Judi Dench as a mother seeking the son she gave up for adoption, and Steve Coogan as the journalist who helps her in her quest.

For the first time, two documentaries will also be running for the top prize: American Errol Morris's The Unknown Known: The Life and Times of Donald Rumsfeld and Italian Gianfranco Rosi's Sacro GRA about a ring road in Rome.

"We've learnt that the distinction between fiction and documentaries belongs to the past, modern cinema moves constantly between the two," Barbera said.

The festival director called for an end to "the myth that Italian films are badly treated in Venice" and pointed to the inclusion in competition of a powerful debut by theatre-director Emma Dante about a female feud in Sicily.

Japanese animation master Hayao Miyazaki is also in the running with The Wind Rises, a Second World War story adapted from Miyazaki's own manga.

Taipei-based director Tsai Ming-liang brings the only Chinese-language work to the competition with Stray Dogs about a family living on the margins.

There has been a lot of buzz from critics already, in particular, over Israeli Amos Gitai's Ana Arabia, which was shot in one 81-minute take.

The 70th edition of the world's oldest film festival, held on Venice's Lido island from August 28th to September 7th, is expected to be light on celebrities.

The lavish parties with A-listers held on the beach near the glamorous Excelsior Hotel since the first edition of the festival in 1932 have dwindled over the past few years, though cocktail soirees aboard boats still abound.

"Our job is not to bring stars onto the red carpet," Barbera said, admitting that the decision to cut down the A-list had been driven by "economic reasons".

"It costs a huge amount to get stars and their staff to the Lido," he said.