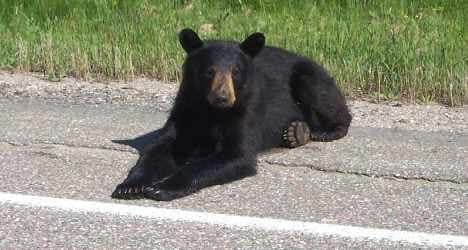 "Bears don't look at borders. They don't need passports," Caterina Rosa Marino, an official with the Italian League for the Abolition of Hunting, told AFP.

The northern Italian region of Trentino, which has reintroduced bears into the wild since 1999, today counts around 40 of the animals and aims to bring the number up to 60 after the population was for years wiped out by hunters.

But in the Swiss canton of Graubuenden, officials have voiced concern about "problem bears" wandering across the Alpine border and posing a danger to locals, and issued a statement earlier this month proposing a cull.

"The culling of problem bears should happen at an early stage in their own territory," the canton said. "These bears are obstructing the local population's acceptance of this large predator."

Georg Brosi of the cantonal Office for Hunting and Fishing told AFP it would be "a shame to wait for a bear to become a danger before acting."

No wild bears are currently known to be in Graubuenden, or anywhere else in Switzerland, and only eight are known to have ventured into the country since 2005. Graubuenden ordered the last of them shot last February.

The slain bear, a two-year-old known as M13, had wandered across from Trentino and had repeatedly ventured into inhabited areas in search of food, first landing it on a problematic behaviour watch-list and then with a cull order, according to local authorities and media reports.

"M13 was executed in Switzerland for stealing potatoes," Marino said.

"What a dangerous criminal! I think the Swiss are pretty sensitive about potato theft," she added. "Some people want to pick up a gun as soon as they see a bear."

Trentino, which locks up dangerous bears but does not shoot them, said this week it was seeking "constructive dialogue" with its Swiss neighbours, but questioned whether M13 was risky or even problematic.

"During the several months the animal spent in Trentino after being separated from its mother it did not cause any problems," the regional authorities said in a statement.

Joanna Schoenenberger, who heads WWF Switzerland's bear division, agreed, said the animal had been on a natural search for food after waking early out of hibernation in February, but had not made it a habit to wander around inhabited areas.

"We all agree that if a bear is dangerous towards humans, it should be shot," she told AFP, but maintained that M13 posed an "absolutely minimal risk," and would certainly have withdrawn into the mountains as soon as more food became available there.

She accused Graubuenden authorities of "creating more fear" by scapegoating all bears as dangerous to humans, speculating that the different attitudes towards the animals might be linked to cultural differences.

"In Italy, there seems to be a higher tolerance for things that are not completely controllable," she said.