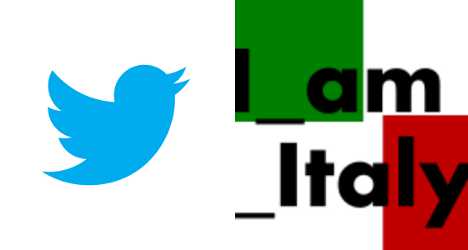 The 'I am Italy' account was launched in January. Photos: Twitter/I am Italy

“We’re evolving from the ‘mafia, spaghetti, mamma’ image of the average Italian, to a country that is becoming more integrated in the globalized world,” Mattia Massa, 28, who co-founded the I am Italy project in January, told The Local. He runs the Twitter account with his childhood friend, 29-year-old Valentina Versari.

The pair grew up in the town of Forlì, in the central Emilia-Romagna region, and describe themselves as being like siblings. Like many young Italians, Valentina left the country and now lives in Berlin, while Mattia stayed close to home and now lives in the city of Ravenna.

They took inspiration from other national ‘rotation curation’ Twitter accounts, which are run each week by a different person who has a connection to the country. The project was first thought up by the National Board for the Promotion of Sweden (NSU) in 2011 and has now spread globally, with countries as diverse as Ukraine, Pakistan and New Zealand taking part.

Mattia says that while he and Valentina took inspiration from the Swedish account, the Italian version differs as it came from Italian citizens rather than a national organization.

Although each rotation curation account has a national focus, they continue to work together to promote the idea. “There is constant interaction between the various international accounts, to help find better practices and help the project grow,” says Mattia.

“We want to move from social media towards a ‘cultural media’, exchanging experiences, stories, facts and traditions,” he says. “This kind of project gives everyone who has ties to a country the chance to be its voice for one week.”

With the Italy account, this not only includes Italians living elsewhere but also foreigners living in Italy. Both have valuable experiences to share, Mattia says. “A foreign student or someone who comes here for work lives their own Italian experience. At the same time, Italians who left might want to tell others what they still feel about their country of origin.”

Foreign curators based in Italy have come from Bulgaria, Canada, Turkey and elsewhere. Italians have themselves tweeted from across the country and a number of other places including Singapore and the Netherlands.

Although the majority of curators are Italian, the account is run in English. Mattia and Valentina say this decision was taken to help non-Italians take part, while also giving them the opportunity to stay in touch with the other rotation curation accounts and “spread the voice of Italy around the world.”

Through being open to the English-speaking world, the Twitter account is also challenging the way Italy is often portrayed in foreign press.

“We are an interesting population in terms of social skills, innovation and human relations. But this is sometimes overshadowed by negatives, such as what happens in politics,” says Mattia.

“We have positive qualities that go beyond normal clichés such as having good food and beautiful monuments,” he says. Although he admits that some stereotypes – such as talking in gestures and always chatting about food – remain true to this day.

Visit the I am Italy website to take part in the project.