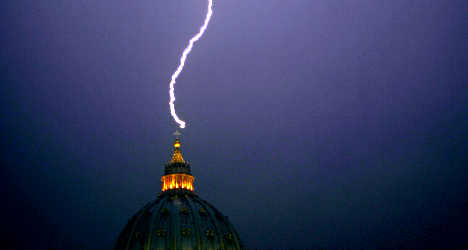 With four months of the year still to go, Italy is already well ahead of the average 1.5 million strikes it experiences annually.

Although yesterday’s bad weather kept many Italians indoors, it is still a far cry from the 100,000 bolts which shot down on September 16th 2004 – the heaviest lightning shower since 1995.

The treacherous weather has already proved deadly this summer. In July, a 12-year-old boy died after being struck by lightning while playing football on the beach.

An ominous sign was also recorded in February, when a lightning bolt struck St Peter's Basilica in the Vatican just hours after Pope Benedict XVI announced his resignation.