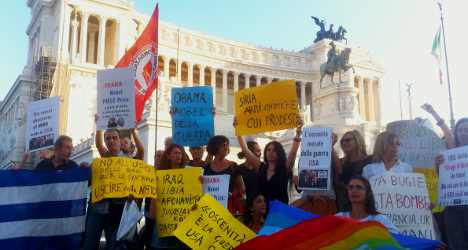 A protest was held in Rome on Thursday night against war in Syria. Photo: Rosie Scammell/The Local

Protesters outside Rome's II Vittoriano monument slammed the US-driven motives for war as being aimed purely at destroying a hostile regime rather than for humanitarian purposes.

In a surprise move, British MPs last night rejected military intervention in Syria while the US has said it will act in its "best interests" in dealing with the crisis. Earlier this week, Italy also rejected intervention without UN backing, while France is in support of "firm action".

The calls to attack Syria were stepped up after at least 355 people were reported to have died in a suspected chemical attack on the outskirts of Damascus on August 21st.

Speaking to The Local, Vincenzo Brandi, 62, said the humanitarian motives were "just an excuse for war".

“It’s like they’ve done in Iran," he said. Earlier this month the CIA, the US intelligence agency, confessed it had played a key role in the overthrow of Iran's democratically-elected Prime Minister Mohammad Mossadeq in 1953.

Manuella Gorreggio, 53, said that war would be “racist, because it’s against ‘the other’” and the only motivation was to protect the interests of the attacking government.

Fellow protester Stefania Russo, 48, likened the war to an “imperialist and colonialist project” and "rape".

“When a woman is raped she is attacked violently, causing a huge amount of pain. The desire to possess a territory is much worse and becomes rape on a huge scale,” Russo said.

Other protesters said there was a lack of clear information to justify war, echoing their government's stance. Earlier this week the Italian government called for UN inspectors to complete their investigations in Syria, in order to determine who is responsible for the chemical attack before deciding on intervention.

Marco Palombo, 55, agreed that war would be unacceptable without knowing who launched the attack on civilians.

“We haven’t seen any evidence of what they [the pro-intervention governments] have said. The war in Syria is already complete chaos,” Palombo said.

Brandi questioned why some governments had been so quick to call for air strikes in Syria in recent days, when civil war has already been raging for more than two years in the country.

“There are more than 100,000 dead in Syria, but they’re talking about a war over chemical weapons without knowing who launched them. I think they had already decided to bomb Syria before this happened,” he said.

Among the protesters was US citizen Patrick Boylan. The 72-year-old said history shows that US-led intervention is based on misinformation.

“In Afghanistan they [the US government] said the Taliban were terrorists and we have to invade; but they’re not terrorists. In Iraq, they said there were weapons of mass destruction, but there weren’t any and that too was just a pretext,” he told The Local.

“Al-Assad has no reasons to use chemical weapons as he’s winning on the ground,” Boylan said. He pointed to the possibility of the forces fighting against the Syrian presidents using the chemical weapons in a bid to give the US "a reason" to intervene.

UN weapons inspectors are due to leave Syria on Saturday, prompting many to believe that military intervention in the country could begin as early as Sunday.

Protesters hoped that their government would not change its stance, although remained uncertain.

“I’ve seen Italy participate in a number of wars and bomb other countries,” said Gorreggio, pointing to involvement in Kosovo, Iraq, Afghanistan and, most recently, Libya.

“I absolutely don’t want to participate in this war. For the first time Italy’s not planning on getting involved – we hope.”