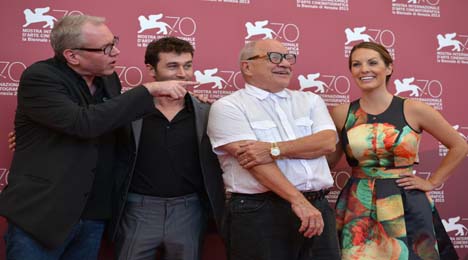 The film purports to be a Los Angeles "neo-noir" about the dangers of sexual obsession and ambition, but critics claim it offers little more than wooden performances, a poor script and gratuitous sex scenes.

Lohan was a no-show after deciding to pull out of the festival at the last minute, leaving co-star Deen, the film's writer Bret Easton Ellis and director Paul Schrader to defend the movie.

However, Easton Ellis, author of American Psycho, admitted the movie had been heavily criticised and many viewers may dislike it.

"It's a cold, dead film, about cold dead people, and that is interesting to us. The sense of listlessness may make the movie slow or boring for some viewers, those who would react better to more 'human' characters," he said.

Schrader, who wrote the 1976 film "Taxi Driver", refused to talk about Lohan's private life but admitted that now the film was done he was "a free man".

"For the last 18 months I have been a hostage of my own choosing to a very talented but unpredictable actress," he said.

"Lindsay is a fearless actress. One of her problems is that she has a hard time faking things and she gets herself worked up into a state that's very hard for her and for those around her," he said.

"What you see on the screen is what was really happening. She stepped up to the mark, but it was exhausting for everyone," he said.