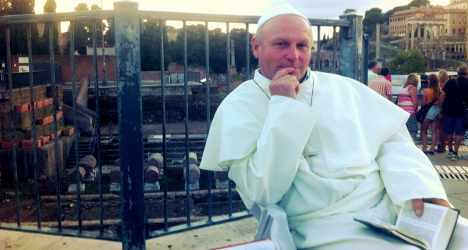 Paolo worked as a miner before coming to Rome in 1993. Photo: Rosie Scammell/The Local

Pope Francis has been welcomed with open arms, but the arrival of another 'pope' in Italy has taken a little more getting used to.

Known as 'Paolo', the 55-year-old from Slovakia, who was detained and fined for imitating John Paul II, insists he is not simply a "pope impersonator" but a "pope double".

"Just as God created all of us, he created me like this,” he told The Local during an interview from his patch on a street in the shadow of the Colosseum.

The former miner's striking resemblance to the late pontiff upset the authorities in May when he was fined up to €929 for 'usurpation' after being caught 'entertaining' the crowds in his white papal vests on a road leading up to the Colosseum. "The problem was that he looked a lot like Karol Wojtyla (John Paul II)," a police spokesperson said at the time.

But relations with the police are more amicable, and Paolo is now a bona fide street entertainer.

“At first I was reported, but then a lawyer helped me and I got a work permit," he says.

Work permits are one thing, but Paolo says his choice to dress as a religious leader has had an “emotional impact”. His commitment to the job, for which he earns around €20 for a daily two-hour session, stems from a desire to "remind tourists and locals alike of the work of Pope John Paul II".

“They think I’m just doing this for the money…but the €20 just helps me live, I can’t do this solely for the money – I’m a believer."

Paolo props up a sign lettings passers-by know that he is not the real John Paul II and will not perform blessings.

He separates himself from Rome’s other street performers, insisting his work is “more profound”.

He spends his free time learning about everything from philosophy to physics.

“I can’t do this work without studying."

Despite being alike in looks, Paolo’s life could not have been more different from the former Krakow archbishop’s.

Yet he believes Pope John Paul II performed a miracle which brought him to Rome.

“Pope Wojtyła made the Berlin wall collapse [in 1989]. I think it was a miracle, he saved millions of people,” Paolo says.

At the time, Paolo was in his home of Czechoslovakia, now Slovakia, where he worked as a miner.

“I worked like crazy, a lot of my friends died in the mines. When people see me here, in white clean clothes, they can’t believe that I was a miner."

When the fall of the Berlin wall opened up eastern Europe, Paolo moved to Vienna and then Rome, arriving 20 years ago.

He did “all sorts of jobs” before he first donned his white robes last year, but now cannot imagine doing any other type of work.

“I won’t stop this until I die; God has commanded it to be this way,” Paolo says.

As popes come and go, he believes that doubles are also replaced at God’s will.

“When I die, someone else who looks like Pope Wojtyła will be born and will do the same thing as I do here…It’s destiny.”