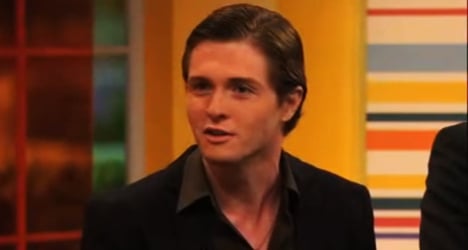 In an interview with the British television programme ITV's Daybreak on Wednesday morning, the 29-year-old Italian criticizes his country's judicial system and speaks about his past and present relationship with Amanda Knox.

Sollecito and Knox were originally sentenced to 25 and 26 years in prison respectively in 2009 for the murder of Knox’s roommate Meredith Kercher, in what prosecutors alleged was the result of a “sex game gone wrong”.

The pair were acquitted in 2011 after serving just four years in prison. In March, however, Italy’s highest appeals court overturned the acquittal and ordered a retrial in a Florence appeals court.

Speaking on the breakfast show (see video below), Sollecito said: “It’s kind of ridiculous to me because in a system you don’t need hundreds of trials. You need just one trial and then if there are mistakes of course you can appeal for a review of the trial.”

Sollecito also spoke of his relationship with Knox, which began shortly before the murder: “It was a teenage romance, it was blossoming so we were eager to date each other and to see each other every day. But as soon as we dated and started to have this romance it was shut down; it was destroyed by events and circumstances.”

When probed about his current relationship with Knox he said that they are still in touch but lead “very different” lives.

However he denied that he ever regretted meeting the American: “No, it’s not her fault. I know that if I didn’t meet her I would have another destiny.”

He said that, while he felt “compassion” for the Kercher family he urged them not to “stand by a prosecution theory that makes no sense”.

Kercher’s half-naked body was found in a pool of blood at the house she shared with the American student in November 2007.

Currently, the only person serving time for Kercher's murder is Rudy Guede, a local drifter from the Ivory Coast who is serving a 16-year prison sentence.

Meanwhile, 26-year-old Amanda Knox has no plans to return to Italy.

"She will not be returning to Italy for the retrial," her lawyer David Marriott told AFP in August. "She is not required to be there and had never agreed to attend."