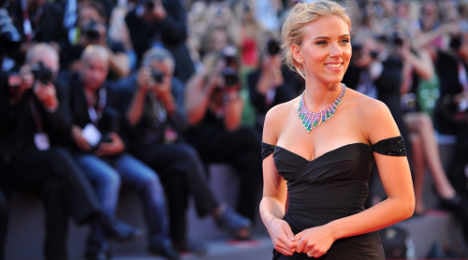 It is unknown whether Scarlett Johansson has a spaghetti breakfast, but the star did surprise fans when she hit the read carpet wearing an engagement ring. Photo: Tiziana Fabi/AFP

Behind the scenes on the Lido island – where holidaymakers wander up from the beach in swimming costumes to mingle with international filmmakers – chefs rustle up fried oysters, lobster risotto and tiramisu on request for VIPs.

"This year at the festival I've had many requests for spaghetti with clams at breakfast," Antonino Sanna, chef at the luxury Excelsior hotel, told Il Gazzettino daily, adding "one star, who I won't name, wants it every morning."

The odd approach to Italian cuisine has been on show ever since the festival opened on August 28th.

At the Excelsior's beach-side dinner party on the festival's opening night, black-tie guests joining George Clooney devoured the quiche, ham and mussels so quickly that late arrivals went without, but were handed strawberries and Moet champagne to swig in the surf.

"I fear everything has been gobbled up by interlopers," complained an Italian starlet, before racing off to one of the many fancy-dress parties thrown in the canal city.

By night, the terraces and beaches of the floating city are flooded with free champagne as socialites and paparazzi ooze around the latest arrivals, from Clooney to Nicolas Cage, Sandra Bullock and Scarlett Johansson.

Blonde Johansson, who stars in Under the Skin as a man-eating alien, propelled screaming fans into overdrive this week when she appeared on the red carpet wearing not only a black Versace gown but what looked like an engagement ring.

Her publicist later confirmed her engagement to journalist Romain Dauriac.

The hysteria almost matched the scenes of chaos when Daniel Radcliffe – aka "Harry Potter" – arrived, sparking a stampede of fans along the beach-front before the ex-wizard went on to star at a kitsch karaoke party he had requested.

The 24-year-old British actor, who brought his parents with him to Venice, had to be rescued after admirers pushed their way into the bathroom with him.

In the darkened cinemas just across the way however, the focus has been on depression, despair and loneliness, as protagonists have been driven to have sex with dead bodies, maim others or kill themselves.

Director James Franco presented Child of God, based on the real serial killer that inspired Silence of the Lambs. US actor Scott Haze slept alone in caves to prepare for his role as a cross-dressing maniac.

Xavier Dolan's Canadian Tom on the Farm has one character chased and strangled in a corn field.

And David Gordon Green's brutal Joe explores the father and son relationship against a backdrop of alcoholism, rape and murder.

Stephen Frears's tragi-comic Philomena, about of a mother's search for her son after he is given up for adoption by nuns, is the only feel-good movie.

Amid all the doom and gloom, it is also the critics' favourite to win.