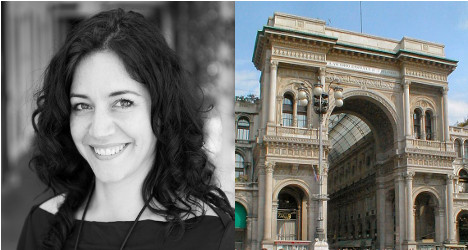 What drew you to Milan?

I did a brief stay in Milan when I first moved and then hopped directly to Rome, where I lived for one-and-a-half years, before moving back up north. Milan is the place to be if you work in technology, and I wanted to work. I rail against Milan sometimes (the weather!) but there are some things which I've grown really used, to like how most things "work" such as public transportation, the medical system, the post office…on a relative scale with the rest of Italy, of course. Oh, and the ethnic food.

How did you go about making friends, especially with Italians?

It's not easy to make friends, anywhere. You have to make an effort, especially to be around people who are also looking to make friends. I think the hardest part about making friends in Italy is many Italians have the same friends from when they were young, and they don't really network for the sake of networking, so you'll have to work harder at networking and meeting people. It's best to find groups of people who are in the same situation as you (i.e., Italians who moved and are making new lives for themselves, foreigners, people actively networking).

Here are some tips about networking I shared which could be helpful.

Tell us a bit about Girl Geek Dinners.

These dinners for women, who work in the technology sector, started in London in 2006, and were brought to Milan in 2007 – I organized the dinners for three years and it was really interesting to bring together a new community of women centered around technology and to promote networking in a more explicit way – I think networking is something most Italians still don't do a lot of. The dinners are still continuing and there are a lot of networking groups now – click here to find out more.

It sounds like you've been pretty busy with lots of other stuff too, with launching World Nutella Day being another initiative. What inspired you to do that and how has it taken off?

I was hearing about a lot of food-related holidays and it surprised me that so many people still didn't know about Nutella – I was talking to another expat and I proposed we just make one up. It's almost seven years now since that happened, and it's taken on a life of its own. I look on it as a bit of a 'proud mamma' whose child has learned to walk…and may soon be moving out of the house. There are 700+ recipes now on the site which were contributed by people all over the world. I have a feeling 2014's celebration is going to be the biggest yet.

What's your favourite thing about Italy?

The food. It's uncomplicated, it lets you get close to it, and it loves you back! Some of the simplest food (in terms of ingredients and preparation) is the best in Italy.

Is there anything you don't like about living in Italy?

Yes, I talked a bit about this in my "Ask Me Anything" post I did in July where my readers could ask me any question – the thing I dislike the most is the lack of information on the Internet from companies, organizations, and government agencies. A lot of things still require an in-person visit to get any sort of reliable information, and that's a shame (and a waste of time).

What advice would you give anyone thinking of moving to Italy?

Never take "no" as the first, or even second, answer, ask for help often and from multiple people for different perspectives, and try not to get discouraged when someone tells you "it can't be done." That's the default answer for a lot of things, but sometimes there are exceptions to the rule, and sometimes you can be one of them.

Sara Rosso is a writer, photographer, and business and digital strategist living in Milan, Italy. She has an MBA and has worked in the technology sector for more than years, and has several personal websites. Originally from California, she has been living in Italy since 2003.