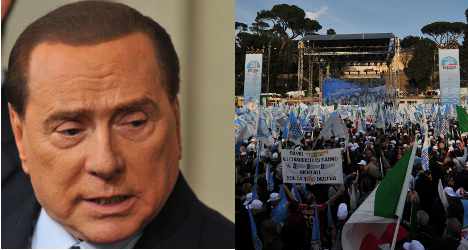 The billionaire former prime minister, who has been in parliament since he burst onto the political scene in 1994, on August 1st lost his final appeal against a tax fraud conviction.

The Senate is now called to vote on expelling him in a procedure that will begin with a committee meeting on Monday but could be delayed by stalling tactics by Berlusconi's supporters.

Berlusconi's People of Freedom (PdL) party has threatened to abandon its uneasy coalition with the centre-left Democratic Party (PD) if PD senators vote to eject him.

His supporters argue that a new law passed last year to ban criminals with sentences of over two years from parliament – a bid to clean up the image of Italian politics – is unconstitutional and should be struck down.

The Supreme Court has upheld a sentence of four years in prison for Berlusconi – meaning the new law comes into play, even though his sentence has been automatically reduced to 12 months of house arrest or community service under a partial amnesty for such cases and because of his age.

PD lawmakers point out that the law was approved with votes from the PdL, which now argues that it should not apply "retroactively" to cases in which the crime was committed before the approval of the law.

There is at least some independent legal backing for the PdL's view.

Guzzetta said doubts "were growing" about the law and "splits could open up between now and Monday".

There are hints of at least some divisions within both the PD and the PdL, with some lawmakers pointing to a possible compromise solution that would spare Berlusconi for now and save the coalition government.

Berlusconi himself has blown hot and cold on the issue, threatening to bring down the coalition one day and saying he will support the government the next.

Officials from President Giorgio Napolitano's office have been quoted by Italian media as saying that a crisis now would carry "very grave risks" for Italy.

Napolitano has said he could grant a pardon to Berlusconi but has specified that a formal request admitting culpability had to be made first.

Stefano Folli, a columnist for business daily Il Sole 24 Ore, said Berlusconi has no interest in bringing down the government since a crisis would be "a very grave risk" for the future of his business empire.

"We are not feeling the end of an era atmosphere typical of imminent crises," he said.

The political crisis "could remain virtual", he said.

The best-selling Corriere della Sera daily said Berlusconi "is less convinced than would appear about throwing away a coalition that he helped build."

Italy has held up relatively well on the financial markets in recent weeks, although borrowing costs have been rising and stocks have been falling, particularly shares in Berlusconi's Mediaset media industry assets.

The current government was formed in April following a lengthy deadlock that ensued after parliamentary elections in February which were very narrowly won by the PD ahead of the PdL.

The vote gave the PD a majority in the lower house Chamber of Deputies but not in the upper house Senate.

Recent opinion polls indicate that if elections were held now, Berlusconi's PdL would come first although maybe not by enough for an overall majority in parliament.

His supporters say that despite his conviction Berlusconi is no common criminal and should be given "political freedom of action" because he is the leader of a party supported by millions of Italians.

The fraud ruling was the first definitive conviction for the scandal-tainted politician in a history of legal woes stretching back decades.

Berlusconi is also appealing convictions for having sex with an underage prostitute, for abusing the powers of the prime minister's office and for leaking a police wiretap to damage a rival.