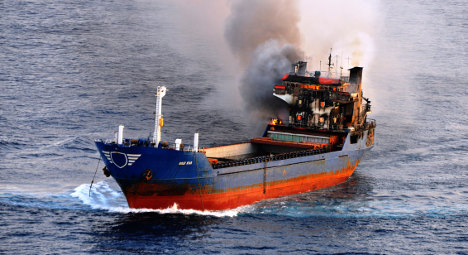 The police said in a statement they were tipped off three days ago about a major drug cargo on the ship sailing across the Mediterranean.

The statement said that on Friday they approached and tried to board the ship, an 85-metre cargo vessel registered in Tanzania.

"The nine crew members, Egyptian and Syrian nationals, set fire to the ship to destroy their precious cargo and jumped into the sea," it said.

The traffickers were fished out of the water and arrested by Italian police and the fire was extinguished after several hours.

Maltese forces helped put out the fire on the 'Gold Star', a spokesman for the Maltese military told AFP, adding that it had deployed three patrol boats and a helicopter in the area.