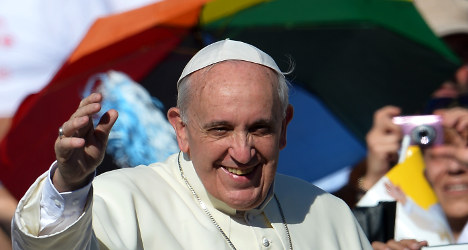 The pope, who arrived with a single bodyguard, spoke to dozens of African migrants during his visit to the Astalli centre and also called for greater respect for diversity.

"The Church does not need to turn empty convents into hotels to earn money. Empty convents are not ours, they are for the flesh of Christ, for refugees," the pope told refugees and staff.

Catholic convents and monasteries in Italy that have been abandoned due to the sharp drop in vocations are often turned into high-end hotels or restaurants – a lucrative and controversial practice.

"Many of you are Muslims or from other religions, you come from different countries, different situations. We should not be afraid of differences!" the pope also said on Tuesday.

"Rome should be a city that allows refugees to regain a human dimension, to start smiling again," he said.

"But instead what often happens as in other cities is that people with 'international protection' written in their papers live in poverty, sometimes in degrading conditions, without a chance of dignity," he said.

On his first trip as pope outside Rome, Francis visited the Italian island of Lampedusa in July, where thousands of refugees land every year and he has repeatedly called for greater tolerance.

His remarks have previously been criticized by some politicians in Italy who have said the country is struggling to house the growing influx of asylum-seekers from restive Mediterranean regions.

The Astalli centre is run by the same Jesuit order of priests that the pope belongs to and caters for around 10,000 impoverished migrants every year.