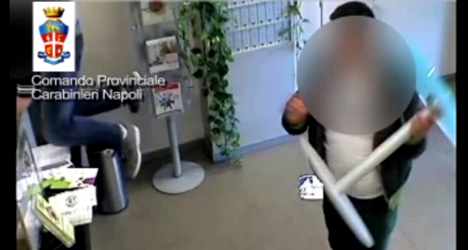 The pair went on the robbing spree after breaking free from their youth rehabilitation centre in Naples.

Their first accomplishment as 'free men' was to steal a car parked outside the centre.

They then sped off towards the Posillipo neighbourhood for their first target: Banco di Napoli, La Repubblica reported.

But the attempted robbery was foiled by a security guard, who chased them away.

Undeterred, they drove just a couple of kilometres away to Banca Popolare di Ancona.

Their second attempt was more successful, with the pair holding up the bank and leaving with €1,600 in cash and the bank manager’s €2,500 Tudor watch.

A video (below) from the bank’s CCTV camera shows one of the thieves leaping up onto the cashier’s desk, while his accomplice chases away a lone customer away by brandishing one of the bank’s tables at him.

During the minute-long heist, the thief continued to walk around carrying the table, while collecting his loot from the bank staff.

Now back in custody, the pair has been charged with theft and attempted theft.