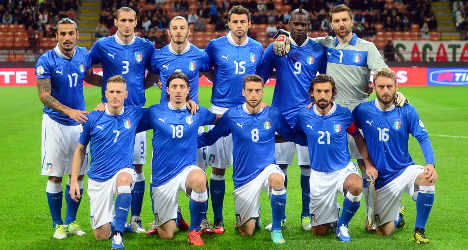 The only World Cup finals Italy have missed remain the 1958 finals in Sweden, and Cesare Prandelli's side knew that a win against the Czech Republic in Turin would confirm their participation in a 14th consecutive finals.

However, they had to overcome a scare in the Juventus Stadium before sealing first place in Group B with two games to spare.

Libor Kozak gave the Czechs the lead in the first half before Giorgio Chiellini netted a 51st-minute equalizer and AC Milan striker Mario Balotelli struck the winner from the penalty spot.

"We've qualified and we're really satisfied," said Prandelli, who is said to be preparing to resign from his post after next summer's showpiece.

The Czechs' defeat means that Bulgaria and Denmark are now best placed to contest second spot in the section and coach Michal Bilek tendered his resignation after the game.

The Netherlands, beaten finalists in South Africa in 2010 as well as the last time the World Cup was staged in South America, in Argentina in 1978, have struggled in this month's qualifying double header.

But a scrambled 2-2 draw in Estonia coupled with a 2-0 win in Andorra on Tuesday proved enough for them to win Group D with two matches to spare.

Manchester United striker Robin van Persie had saved the Dutch in Tallinn on Friday with an injury-time penalty and he scored twice four minutes apart early in the second half to see off Andorra.

Van Persie later described his team's performance as "laborious" but his coach Louis van Gaal was more interested in the final outcome.

"We are very pleased to have qualified. When you look at the state of the team after the European Championship and the work we had to do, creating a new team, it has not been easy," he said.

"So to be the first European country to qualify is a great result."

Germany could have qualified on Tuesday too, but while they ran out 3-0 winners in the Faroe Islands, with Per Mertesacker and Thomas Mueller on target either side of a Mesut Ozil penalty, other results did not go in their favour.

Joachim Loew's side needed Sweden to slip-up in Kazakhstan but a first-minute Zlatan Ibrahimovic goal, his 45th for his country, gave the Scandinavian nation a 1-0 win.

That means Sweden are on course to finish second in Group C, with Austria three points behind in third after a late David Alaba goal gave them a 1-0 win against the Republic of Ireland.

"It was a mandatory requirement to pick up three points here and it was the sort of game we had expected," admitted Loew after Germany's win, and they can now seal top spot by beating Ireland at home next month too.

Switzerland can wrap up qualification from Group E next month after a 2-0 victory in Norway, achieved thanks to a Fabian Schar brace, left Ottmar Hitzfeld's side five points clear of Iceland with two games remaining.

England still have work to do in Group H, even if a goalless draw in Ukraine left them a point clear of both their hosts and Montenegro, while Poland are also still in contention thanks to a 5-1 success in San Marino.

And France moved back level on points with Spain at the top of Group I, albeit having played a game more, after coming from behind twice to win 4-2 in Belarus.

Les Bleus ended a goal drought of over 500 minutes and overcame two howlers by goalkeeper Hugo Lloris to win thanks to a brace by Franck Ribery and further efforts from Samir Nasri and Paul Pogba.

That means they are now guaranteed to at least finish second in the section.

Elsewhere, Fabio Capello's Russia are back on top of Group F, a point ahead of Portugal, after downing Israel 3-1 in Saint Petersburg, while Bosnia-Herzegovina and Greece are still locked level on points atop Group G.

Bosnia came from behind to win 2-1 in Slovakia while a solitary Dimitrios Salpingidis effort allowed Greece to see off Latvia.