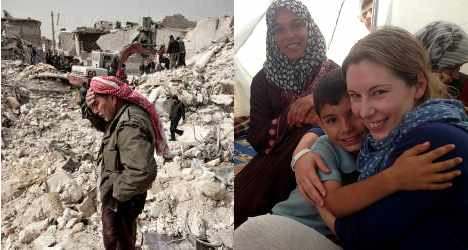 A 32-year-old mother of three, Elisa Fangareggi is a lawyer and co-founder of the organization Time4Life.

An organization set up by Elisa and a friend to help people in Syria during the civil war.

“My best friend is Syrian and he told me about the conflict,” Elisa tells The Local.

She had never worked with Syrians before, but after hearing about the war, she packed her bags with medicine and clothes and went to help.

“Slowly our idea grew, and more and more people decided to help us,” she says, a year after her first visit.

Time4Life became an official association this month and now runs a clinic, a pharmacy and six schools in the country.

Yes, she returns regularly, with her next trip planned at the end of this week. She crosses the border with Turkey in the north and visits places including Aleppo, a flashpoint in the conflict which has suffered widespread bombing by government forces.

Isn’t it too dangerous?

“When you see the injured children, there is no room for fear,” Elisa says.

But foreigners are not immune from the conflict, which has left more than 100,000 people dead and prompted over two million Syrians to flee.

Earlier this week, Italian journalist Domenico Quirico was freed five months after being kidnapped in Syria, during which time he said hostages were “treated like animals”.

An Italian priest who went to Syria to help negotiate a hostage release, Father Paolo Dall'Oglio, went missing in July.

Is it worth risking her life?

“Before I embarked on this project I got my family together to see how they would react, and to see if my oldest daughter would ask me not to go,” she says.

“But she didn’t. When her mum’s in Syria she takes care of her sisters, and puts them to bed in a little bedroom that so many Syrian children don’t have any more,” Elisa says on her website.

“For me being a parent is not only about my three daughters,” she told Corriere della Sera. “I feel that it’s my duty to do something for other children.”