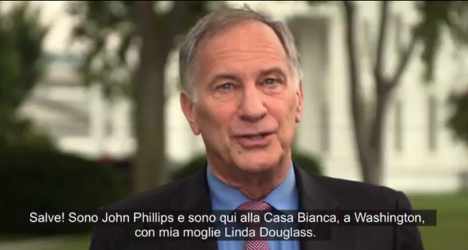 “Salve!” Phillips begins, before introducing himself in Italian and saying he is proud and honoured to be the new ambassador in Rome. He is joined by his wife, Linda Douglass, who in Italian says “we are both very happy for the opportunity to live in your wonderful country”.

The new ambassador also takes the opportunity to explain his family ties to the country. “I am the grandson of Italian immigrants Angelo Filippi and Lucy Colussy and I grew up in a close-knit Italian-American family,” he says in English.

The new ambassador was nominated for the post by US President Barack Obama this summer. Speaking at a US Senate committee meeting in July, Phillips said his grandparents were originally from the Friuli-Venezia Giulia region and moved to the US “to seek a better life”.

While Phillips will likely spend much of his time at the fortress-like US embassy in central Rome, in the YouTube video he says in Italian that he can’t wait to “taste the delicious dishes of each region”. He will also be making the most of the Italian countryside by cycling and hiking, while also playing bowls.

The video has delighted Italians, who responded enthusiastically on YouTube and the embassy’s Facebook page. “If you want to take a ride in an old Vespa in Rome drop me a line!” Maurizio Martinoli wrote on YouTube. Numerous others welcomed the couple to Italy with messages posted from across the country, including Sicily and the north-eastern city of Trieste.

Phillips, a lawyer who represented whistleblowers before turning to diplomacy this year, replaces David Thorne who grew up in Rome.