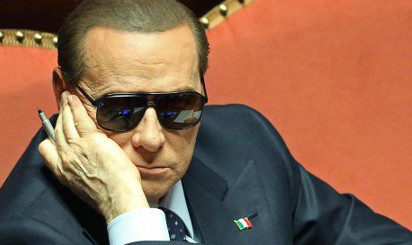 It’s been a busy couple of decades for Silvio Berlusconi.  Apart from winning three elections, he has been handed more than 17 years of prison time for crimes including embezzlement, tax evasion and buying judges.

The so-called 'Il Cavaliere' ('the Knight') is also appealing convictions for having sex with an underage prostitute at a ‘bunga bunga’ party, for abusing the powers of the prime minister’s office and for leaking a police wiretap to damage a rival.

More recently, a court in Sicily said the former prime minister was linked to the mafia through Marcello Dell’Utri, an ex-People of Freedom party politician who was convicted of “making a pact” with the notorious crime group to protect Berlusconi.

Yet none of this seems to bother the scandal-tainted politician’s loyal – and growing – army of supporters.

Many of his supporters treat him more like a rock star than a politician. On Facebook, a page for “all those who love/admire/think is hot/would like to be Berlusconi” has attracted more than 11,000 members while his official page has 538,900 ‘likes’, compared to just 24,747 for Enrico Letta.

Entrepreneur Simone Furlan, who owns Hotel Glamour in Vicenze, was 19 when the former cruise-ship singer was first voted into power in 1994 and has been a loyal fan ever since.

But years of observing the legal travails of his favourite politician – many supporters call it a witch hunt – finally prompted him to set up an online fan club called ‘L’Esercito della Liberta’ ('Army of Liberty').

In Furlan’s point of view, simply the fact that Berlusconi has fought his way to power three times shows he’s an “extraordinary man, a great leader and a patriot who loves Italy”.

Since launching the site in May, a time when the nation was gripped by the ‘Ruby the Heart Stealer’ trial, Furlan says it has attracted more than 150,000 like-minded individuals.

“I thought to myself, ‘where are his supporters? where are the people who voted for him? And so I set up the club,” he told The Local.

Included on the site is a video about Berlusconi’s life and a biography entitled “The extraordinary life of Silvio Berlusconi”, a selective history of his life which includes his star sign and an account of his school days.

“His former classmates remember how Berlusconi would do his homework in a flash before helping those sitting next to him and how he would share toys, sweets and snacks. His entrepreneurial spirit was innate,” it reads.

Furlan says the same traits have helped Berlusconi win elections. At the age of 76, he also believes he is still “capable of saving the country”.

“I believe Berlusconi is a key figure for a modern Italy,” he adds.

While non-supporters blame Berlusconi for ruining the economy, Furlan believes the opposite.

“He has done so much for business people like me, he also did a lot for tourism in Italy, which has helped my business.”

As for the various court cases and allegations, Furlan says Berlusconi has been a “victim of the judicial system”.

“There are fundamental problems in Italy, but that’s not the fault of Berlusconi.”

Andrea Bianchi, a 66-year-old businessman from Milan, hasn’t always been Berlusconi voter, but he agrees with Furlan, especially when it comes to helping business people.

“He’s an innovator,” says Bianchi, who has worked in the Italian diplomatic service as well as in shipping and finance.

Bianchi admires Berlusconi for “coming from virtually nothing” to being "a success in business".

“He’s a man who works hard, around-the-clock. He never stops working. Most of the projects he set out to do were completed,” he says.

He believes Berlusconi was wrong to be convicted in the Mediaset tax-evasion case and that any financial wrongdoing within the company should be the responsibility of its managing director.

“You can’t convict someone just because they might have been aware of what was going on, which is what I believe has happened.”

Bianchi also says you can’t condemn someone just because of their party lifestyle.

“He’s always played, even when he was young, and likes to party. But that doesn’t mean you can accuse him of prostitution.”

A young engineer from Rome, who asked not to be named, says that left-wing parties do their best to blame Berlusconi for all that is wrong with Italy, when much of the problems lies with Europe, the banks and Italy’s judicial system.

He told The Local that Berlusconi arrived on the scene in 1993 with a “liberal view that was well married with the economic and monetary policy of the era”, with Italy at the time needing to be “dragged out of a dark period.”

He added that the left was “envious of Berlusconi’s personality and skill as a man of business”, and so sought to bring him down.

Plenty of others seem to agree, with dozens of messages of support continuing to fill Berlusconi’s People of Freedom party website as he regains ground with the revival of Forza Italia.

“I can’t wait until Silvio pulls the plug on this ridiculous government!”, says one fan, while another says, “Silvio, we are all with you! This is a great opportunity for the country!”

With this in mind, Italy is yet to see the last of the Knight.