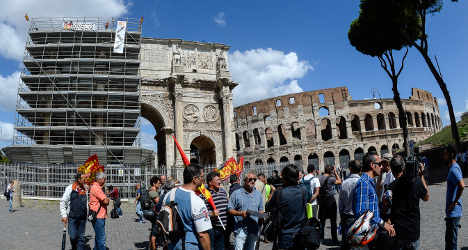 Protesters unfurl a banner over the Arch of Constantine in Rome. Photo: Andreas Solaro/AFP

They climbed up on scaffolding surrounding the 1,700-year-old, 21-metre arch and unfurled a banner reading: "Work, Rights and Respect".

The men have lost their jobs at the Institute Urbe and were demanding back pay they say is owed to them, saying they would stay until the mayor of Rome came to talk to them.

The incident was not the first time an Italian has staged a protest from a major landmark. In May a protester climbed up St Peter's Basilica calling on Pope Francis to stop the social "massacre" happening in Italy as a result of the economic crisis.