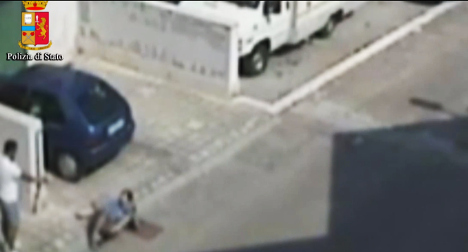 In a one-minute surveillance tape dated August 22nd that has had viewers all around the world gasping in horror, a man armed with a gun in the city of Foggia in the southern region of Puglia, is seen pursuing his victim in broad daylight.

At the start of the tape, which you can watch below, the attacker is observed cycling up the street in the right-hand corner of the screen. Moments later, his victim can be seen walking down the road.

A chase ensues, in which the attacker runs down the road in pursuit of his victim pointing a gun.

Another camera angle then shows the victim falling to the ground, after suffering a bullet to the leg.

The gunman approaches him, ready to finish him off with the final coup de grace or colpo di grazia as it is known in Italian. The writhing victim extends his arms in protest, but the determined attacker continues to shoot, only to realize that the gun isn’t loaded.

Now, thanks to the well-placed CCTV cameras in the area, police have now identified and arrested the alleged would-be killer as 24-year-old Michele Morelli.

According to unconfirmed reports in La Stampa, the shooting was related to the purchase of a car which was acquired through illicit means. However, the victim has not yet confirmed this hypothesis to police.