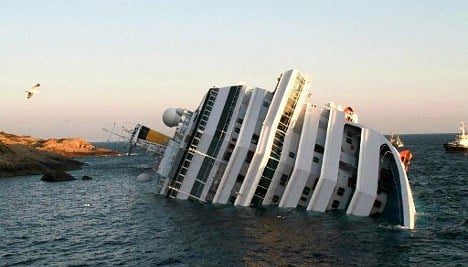 The 290-metre could be seen gradually turning upright from the sideways position it has been in ever since foundering off the Tuscan coast in January 2012 in a tragedy that claimed 32 lives.

The side of the 114,500-ton ship that had been underwater was rusty and brownish, contrasting with the white of the exposed side, although officials said the shift in the angle was only one or two degrees.

The biggest salvage of a passenger ship ever attempted was initially delayed by several hours because of storms. It began after a strict maritime exclusion zone was established around the site on the island of Giglio.

"The senior salvage master gave the order to activate the commands," the civil protection agency, which is overseeing the project, said in a statement.

Salvage coordinators say the lifting could last up to 12 hours and warn there will be some spillage of the ship's waste into the pristine Mediterranean waters.

But they have played down environmentalist fears of thousands of tons of toxic waste pouring into the sea, saying they are ready to clean up any spill.

"The concentrations will be limited. There is no contamination problem," said Giandomenico Ardizzone, a marine biology professor working on the project.

Ardizzone estimated that 29,000 tons of waste will pour out but said the quantity of toxic material will not be sufficient to cause permanent damage.

The bigger concern for the salvage workers is whether the weakened hull of the ship can withstand the enormous pressure it will be under as it is winched up.

They have however ruled out the possibility of a split.

The man giving the orders from a control room on a barge next to the Costa Concordia is Nick Sloane, a South African salvage master with years of experience on spectacular shipwrecks around the world.

Islanders whose lives have been turned upside-down by the wreck said they were relieved that the time when the ship will finally be removed was drawing closer.

Even if the ship is lifted upright, they will have months more to wait, as the towing away is not planned until spring of next year after winter storms.

The ship will then be cut up for scrap.

Special prayers were held in a local church on the eve of the operation on Sunday for the victims of the wreck and for the success of the salvage.

"The sooner it happens, the better," said the parish priest, Father Lorenzo Pasquotti, who opened his church to survivors on the night of the disaster.

The Costa Concordia was once a floating pleasure palace filled with entertainment and sporting facilities, including four swimming pools and the largest spa centre ever built on a ship.

It struck a group of rocks off Giglio after veering sharply towards the island in a bravado sail-by allegedly ordered by captain Francesco Schettino.

Dubbed "Captain Coward" and "Italy's most hated man" for apparently abandoning the ship while passengers were still being evacuated, Schettino is on trial.

Four crew members and the head of ship owner Costa Crociere's crisis unit were handed short prison sentences of up to 34 months in prison earlier this year for their roles in the crash.

The ship had 4,229 people from 70 countries on board when the crash happened and many people were sitting down for dinner on the first night of their cruise.

It keeled over in shallow waters within sight of Giglio's tiny port but the order to abandon the vessel came more than an hour later – a fatal delay.

By that time, lifeboats on one side of the ship were virtually unusable because of the tilt and there was panic as people rushed for the remaining ones.

Hundreds were forced to either jump into the water in the darkness and swim ashore or lower themselves along the exposed hull of the ship to waiting boats.

The salvage operation has already eaten up €600 million euros and insurers estimate it could cost more than €750 million by the end.