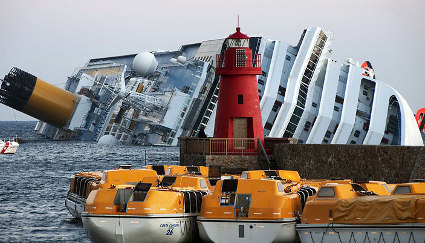 The 290-metre long ship has lain on its side ever since foundering off the Tuscan coast on the night of January 13th 2012 in a tragedy that claimed 32 lives.

Overnight storms delayed the start of the operation to 8.00am.

The last ferry was allowed to leave the Giglio island early on Monday before the imposition of a maritime exclusion zone.

Salvage coordinators estimate the lifting could last up to 12 hours and say there will inevitably be some spillage of its waste contents into the pristine Mediterranean waters.

Activists warn thousands of tons of toxic waste will pour into the sea – but officials say they are ready with extra floating booms and clean-up boats if there is a spill.

The bigger concern for the salvage workers is the resistance of the hull of the ship to the enormous pressures it will have to withstand as it is winched up.

They have however ruled out the possibility of it splitting.

The man giving the orders from a control room on the shore will be Nick Sloane, a South African salvage master with years of experience on shipwrecks around the world.

"We are ready. All the risks have been identified," Sloane told reporters on the island ahead of the start.

Islanders whose lives have been turned upside-down by the wreck said they were relieved that the time when the ship will be refloated and towed away was drawing closer.

Even if the ship is lifted upright, they will have months more to wait, as removal is not planned until spring of next year after autumn and winter storms have abated.

The ship will then be cut up for scrap in a shipyard.

"There is a lot of expectation because this is the concrete realisation of a year of hard work," said Sergio Ortelli, mayor of the island, which has only a few hundred residents.

"We are sure everything will go well tomorrow," he said.

The Costa Concordia was once a floating pleasure palace filled with entertainment and sporting facilities, including four swimming pools and the largest spa on a ship.

It struck a group of rocks just offshore from Giglio after veering sharply towards the island in a bravado sail-by manoeuvre allegedly ordered by captain Francesco Schettino.

Dubbed "Captain Coward" and "Italy's most hated man" for apparently abandoning the ship while passengers were still being evacuated, Schettino is currently on trial.

Four crew members and the head of ship owner Costa Crociere's crisis unit were handed short prison sentences earlier this year for their roles in the crash.

The ship had 4,229 passengers and crew from 70 countries on board when the crash happened and many people were sitting down for dinner on the first night of their cruise.

It veered sharply after impact and keeled over in shallow waters within sight of Giglio's tiny port but the order to abandon the vessel came more than an hour later.

By that time, lifeboats on one side of the ship were virtually unusable because of the tilt and there were scenes of panic as people rushed for the remaining ones.

Hundreds were forced to either jump into the water in the darkness and swim ashore or lower themselves along the exposed hull of the ship to waiting boats.

The salvage operation has already eaten up €600 million and could cost more than €750 million by the end.

Five hundred people from 26 countries have been involved with the salvage, including divers working around the clock to stabilize the wreck because of fears immediately after the crash that the hulk could slip into deeper waters.

A lot of the predictions for Monday being made by salvage workers are just assumptions based on calculations as there has never been a salvage of a passenger ship of this size.

Franco Porcellacchia, technical director of the project, said: "We have carried out all the preliminary checks but it's difficult to make hypotheses without any precedents."