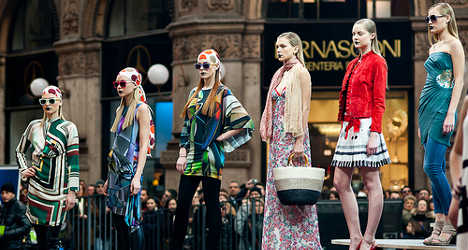 Milan fashion week is "the most prestigious platform for young talent" according to Franca Sozzani, editor of Vogue Italia. Photo: Mat's Eye/Flickr

Silver-maned Italian stallions and leggy Russian models strutted their stuff on the streets of Italy's commercial capital, shopping in the city's fashion district or sipping cool cocktails at outdoor terraces in the last summer sun.

Gucci, DSquared2 and Alberta Ferretti kick off 74 catwalks for the spring/summer 2014 collections on Wednesday, preceded by revelry at Vogue Fashion's Night Out with crowds of clubbers packing into boutiques.

The city this year is trying to encourage young people to join the fashion business and there will be five designers showing a collection for the first time.

Milan has to establish itself as "the most prestigious platform for young talent", Franca Sozzani, editor of Vogue Italia, said at a press conference.

In a first for the city, top names in the business including Giorgio Armani and Roberto Cavalli will join Milan mayor Giuliano Pisapia at the world-famous La Scala opera house for a formal inauguration later on Wednesday.

French-owned Fendi and pride of Milan Prada take to the catwalks on Thursday, followed by Emporio Armani, Etro and Versace on Friday.

Saturday it will be the turn of Bottega Veneta, Roberto Cavalli, Gil Sander and Moschino, then Missoni and Salvatore Ferragamo on Sunday.

Dolce & Gabbana will also be showing on Sunday although they are not on the official calendar following a re-organization of fashion week and a spat with Milan authorities over a tax fraud case they are involved in.

Giorgio Armani and Gianfranco Ferre will round off the week on Monday.

Among the new faces this year are some established names like luxury jacket maker Fay on Wednesday and shoe giant Tod's which will show on Friday.

Italian fashion house Costume National will also be returning to Milan after more than two decades of showing in Paris – a gesture of solidarity from designer Ennio Capasa to help out Italy at a time of economic hardship.

Mario Boselli, head of the National Chamber of Italian Fashion, which organises Milan Fashion Week, said the latest estimates point to turnover for the industry next year that will equal that of 2008 before the economic crisis.

"For the first time we have hopes that the domestic market will prove more buzzing," Boselli said earlier, although he admitted that turnover as a whole for 2013 would still be down 2.5 percent from the previous year.

On the eve of fashion week, Prada issued an upbeat earnings statement thanks to healthy purchasing in China and a pick-up in sales in Europe.

The company posted a net profit of €308.2 million in the first semester – a 7.6-percent increase from 12 months previously.

The company, which started out in the early 20th century as a luxury luggage maker in Milan, said it could "look ahead with confidence to the near future".