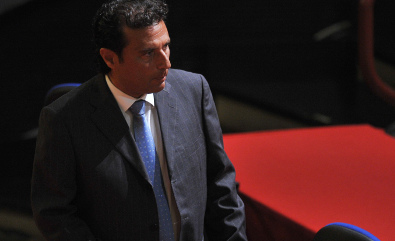 "I wanted to slow the ship down. But the helmsman did not follow my orders correctly," Schettino told a court in Grosseto, where the trial against him for manslaughter and abandoning ship resumed after a summer recess.

"He steered in the wrong direction and we crashed," he said, according to Italian media reports, accusing the helmsman, Jacob Rusli Bin, of making a mistake that caused a fatal delay in changing the ship's course.

Schettino said: "If it weren't for the delay and the mistake… the ship would have stopped," he added, after requesting permission from the court to speak.

Schettino, dubbed "Italy's most hated man" by the tabloids, is accused of sailing too fast and too close to the island in a risky manoeuvre to "salute" the residents, an Italian maritime tradition.

His defence team asked permission Monday for experts to go aboard the wreckage to determine whether technical problems contributed to the disaster.

"It is now possible to carry out an inspection on board the Concordia. Parts of the ship are now above water and work can begin," lawyer Francesco Pepe told journalists outside the court.

The ship was hoisted upright last week from its watery grave off Giglio island following the biggest-ever salvage operation of its kind, 20 months after it ran aground.

Reports following the crash suggested that some safety mechanisms on board the ship failed to function, aggravating the situation.

"We will only be able to ascertain the truth and understand what happened after a fresh inspection of apparatus such as the emergency generators, the watertight doors and the lifeboat launches," Pepe said.

The 52-year-old captain insists ship owner Costa Crociere, Europe's biggest cruise operator, should take its share of the blame for the deaths of the victims, some of whom were forced to jump into the freezing sea after a problem deploying lifeboats.

Costa lawyer Marco De Luca told journalists on Monday that the initial survey of the ship carried out by experts before the trial began was "exhaustive", but it will be up to the court to decide whether a further investigation should be carried out.

Admiral Giuseppe Cavo Dragone, who led the team that examined the ship's black box, rebutted the claim that Rusli Bin was to blame.

"The helmsman was 13 seconds late in following the order but the impact would have taken place in any case," he said.

Rusli Bin was sentenced in July to a year and eight months in jail after a court accepted a plea bargain for his role in the crash.

An initial probe suggested that the helmsman may have misunderstood Schettino's order because of language problems.

Four other suspects, including the director of ship owner Costa Crociere's crisis unit, were also sentenced to jail in plea bargain deals.