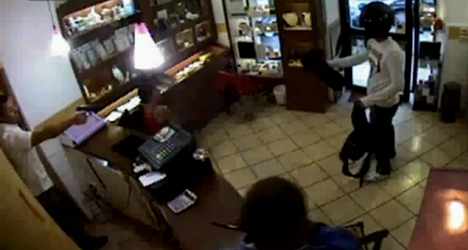 Video footage (below) shows a pair of thieves, one wielding a pistol, entering the shop, in Giardini Naxos, Messina.

The armed thief rushes to the back room, but soon returns with the shop owner angrily waving his own gun.

The robbers appear entirely unprepared for an armed victim and soon they are dumping the jewellery and running away.

The owner, apparently unafraid of the robbers' own gun, chases them down the street.

It is unclear whether the thieves were caught.