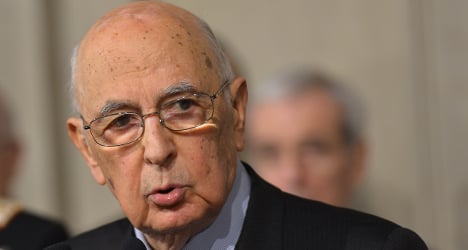 Speaking at the Quirinale presidential palace in Rome, Giorgio Napolitano said "the economy and employment are slow in recovering", ANSA news agency reported.

Napolitano added that "new hope arises over the possibility of more solid development, on more righteous foundations, both of the economy and of society."

Italy, the third-largest economy in the eurozone, has been stuck in recession for two years and officials say a tentative recovery could begin later this year, although they are forecasting the economy will contract by 1.4 percent overall in 2013.

"Recent indicators show a gradual improvement," Bank of Italy governor Ignazio Visco said in a speech earlier this month, adding that "the decline in production should cease in the next few months".

Visco also warned, however, that "investor concern over possible political instability" could be a potential drag on the economic recovery.