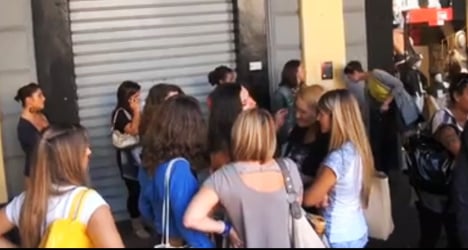 Only three positions were advertised at the Genoa branch of the Italian clothing chain Tipinifini, but that didn’t stop 500 women from applying.

And with the promise of a monthly salary of €1,100, the long queue did not appear to deter them, with several queuing for hours just to submit their application.

By 9.30am the square where the shop was based was already full of hopeful applicants, the local Secolo XIX paper reported.

“All kinds of people came,” Angela Adinolfi, a cashier at the shop told the paper. “Housewives, girls, women with many years of experience, people who already have jobs but without a real contract, and those who even offered to work for free, hoping that this will be the first step towards getting hired.

“I expected some activity outside the shop but not as many as this,” she added.

Gaia, a 32-year-old experienced shop assistant waiting in the queue told the paper she has been unemployed for a year. “So I’m feeling quite indignant,” she said, adding that the queue was a sign of the extent of the Italy’s financial crisis.

Serena, 22, told the paper she had been forced to work off the books because she had been unable to find a job with a contract.

She said that she was not surprised to see so many women queuing up outside. “It’s not the first time, I’ve been in many similar situations,” she told the paper.

A woman called Elisabetta told the paper: “At 26, I’ve done everything from work as a shop assistant to barmaid and waitress.”

Women in their forties were also in the queue. "I've been unemployed for two long years," Barbara, 47, told the paper. "I have a five-year-old daughter and we survive thanks to my parents."

This isn’t the first time that a job advertisement in Italy has attracted floods of applications.

In July, the national statistics agency Istat estimated that 22.5 million Italians were employed, with the over-all unemployment rate standing at 12 percent.

“Ikea is a multinational company and can provide work benefits…competition is strong and it is very hard to find something that specifically matches your profile, so everyone applies for the same company,” Gaià Paradiso, a 25-year-old student told The Local at the time.