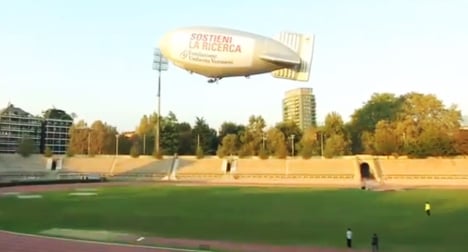 The airship, which was publicizing the scientific foundation Fondazione Veronesi, crashed into a pylon at around 18:40 on Tuesday just as it was taking off outside the Arena Civica stadium in central Milan, La Repubblica reported.

As a result, part of the rudder became detached, causing the five-strong crew to lose control of the airship, which was destined for Bresso.

As the crew struggled to regain control, airplanes at the nearby Linate airport were delayed for around 20 minutes for security reasons.

Finally, after almost an hour up in the air, the frightened crew successfully managed an emergency landing around 7:30pm, in the sporting complex Parco Marx in Sesto San Giovanni, north of Milan’s centre and 10 kilometres from where it took off.

No one was hurt.