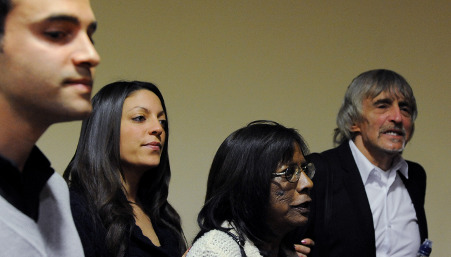 Knox has carried out a number of interviews with the British, Italian and US press over the past few weeks, during which she declared a desire to one day meet the Kerchers and visit Meredith’s grave.

The Kercher family, from south London, has issued a statement through their lawyer, Francesco Maresca, making it clear they do not want anyone other than family and friends visiting their daughter's grave.

"It took us as a family nearly five years to even begin to feel ready to lay Mez to rest and it is still extremely painful now, however she now has a place near to us that we and her friends can visit to take flowers and spend time," Meredith's elder sister, Stephanie, said in the statement seen by The Local.

"For me, I hope that despite the fact the case continues, she is resting in peace but knowing Mez, she will be fighting until the end."

Stephanie added that travelling to Italy on November 6th 2007, five days after her sister was found dead in the house she shared with Knox in Perugia, was the "most difficult day of my life, identifying my little sister laying there so cold and lifeless."

She continued: "Something I wouldn't wish upon anyone, and that stays with me every single day. My mum and I were the last ones to lay our touch on Mez that day, to let her know that we were there and we had come to bring her home. Her grave is now her safe place to sleep in peace and be with us and we hope that is respected by all."

Maresca told The Local that Meredith's parents, John and Arline, would not be attending Monday's hearing in Florence due to ill health. Stephanie will also not be attending.

Meredith was on a study year at Perugia's University for Foreigners as part of a degree course in politics and Italian when she was murdered at 21 years old.

Knox and her Italian ex-boyfriend Rafaelle Sollecito were found guilty of the murder in 2009, but acquitted on appeal in 2011.

But in March Italy’s Supreme Court overturned both acquittals and ordered a fresh appeals process. The first hearing will take place in Florence on Monday.

Knox, 26, has decided not to return for the retrial, saying her stint in prison aged her by 40 years and she suffers from panic attacks and depression. Sollecito, 29, has been living in the Dominican Republic but his family has said he will attend court later on in the trial, which could last months.