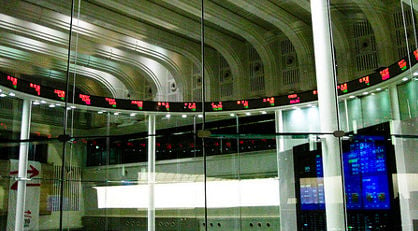 Stocks were down more than 2.0 percent in morning trading, while the rate of return demanded by investors on 10-year government bonds went up to 4.598 percent from 4.416 percent on Friday.

"The Berlusconi effect strikes again and there is alarm on the markets," the financial news website firstonline.info said in its market commentary.

After weeks of bickering, Berlusconi on Saturday said he was pulling his party's five ministers out of a fragile coalition government with the left and called for early elections as soon as possible.

Letta, a moderate leftist who only came to power this year and has struggled to boost a flagging economy, accused the three-time former prime minister of a "crazy and irresponsible" act.

The 47-year-old Letta has warned against elections at a sensitive time for Italy on the financial markets and just as the economy was hoping to shake off two years of a devastating recession.

He is hoping that members of Berlusconi's party will rebel against their 77-year-old leader by staying in government and voting to support it at a parliamentary confidence vote on Wednesday.

Party leaders in parliament are due to meet on Monday for talks in which the rifts within Berlusconi's ranks could become more evident.

"We have to recognize that the risk of early elections is not insignificant but we think Berlusconi's gamble will not work in the end," said Matteo Cominetta, an analyst for HSBC bank.

Letta said in a television interview on Sunday that he would resign if he does not win the vote, adding: "I don't intend to govern at all costs."

The outgoing ministers, while toeing the party line by resigning, have tried to distance themselves from Berlusconi, who has dominated Italian politics for much of the past 20 years.

One possible scenario is that Letta's government could limp on – either in its current form or following a reshuffle – with support from Berlusconi rebels and breakaway members of the anti-establishment Five Star Movement.

Berlusconi has warned his supporters against turning into "traitors", saying: "I do not believe in some little government made up of transfers."

He has said elections are "the only way".

Letta has said the justification used by Berlusconi for withdrawing support for the government – failure by the cabinet to stop a planned hike in VAT sales tax to 22 percent this week – was a smokescreen for his own interests.

Tensions have come to a head after the supreme court on August 1st handed Berlusconi his first-ever definitive criminal conviction for tax fraud in a long history of legal woes and sex scandals.

He has called for the Senate committee deciding his fate to be recused pending an appeal to the European Court of Human Rights against the law.

The committee is to hold a first vote on Friday on whether to press ahead with the expulsion and a required vote by the entire Senate is expected later in October, when a court will also decide whether he has to do a year of house arrest or community service as part of the same conviction.

Berlusconi is appealing other convictions for having sex with an underage 17-year-old prostitute and for abuse of office when he was prime minister.

President Giorgio Napolitano, who plays a steering role during Italy's frequent political crises, has said he will call elections only as a last resort and has stressed that he wants the electoral law changed before any new vote is held.

The law was blamed across the political spectrum for the inconclusive result of a general election in February which failed to produce a clear winner.

Letta's coalition was forged by Napolitano after a two-month deadlock between the prime minister's centre-left Democratic Party, which won the vote by a razor-thin margin, and its eternal rival, Berlusconi's People of Freedom party.