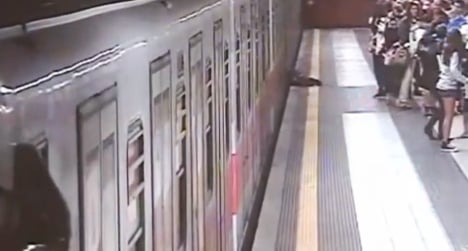 A shocking video clip showing a man who survives after falling headfirst into the train tracks at the Duomo metro station in central Milan as a train leaves the platform has been circulated on the web.

Incredibly, the man escaped with minor injuries, thanks to the quick thinking of the train driver.

Milano Today reports that the man had been walking along the train platform at around 8:30pm on September 16th at the central Duomo station when his arm got caught between the train doors, causing him to lose his balance.

The CCTV footage, which has been published in the Italian media and on YouTube, then shows the man fall headfirst into the tracks as the train starts to move, his legs lying motionless on the platform as commuters look on in horror.

But according to Italian daily Milano Today, the man survived with minor injuries, thanks to the train driver, who stopped the train within seconds of the accident.

The man was rushed to the Fatebenefratelli hospital where he was treated for minor injuries, including a swelling of the face and grazes to the torso.

The lucky escape has been described as “miraculous” by the Italian media.

As a result of the accident, the red metro line was suspended for around 30 minutes between the stations Cairoli and Lima, before resuming service at 9pm, the paper reports.

You can watch the YouTube video of his lucky escape below.