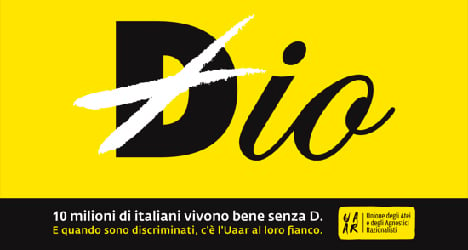 Italy may have a large population of believers, with a survey suggesting that 87.8 percent of Italians are Catholic, but there is also an active number of atheists and agnostics in the country.

Twenty posters bearing an atheist message have sparked a debate in the city of Turin, in the northern Italian region of Piemonte.

The controversial poster, which measures 4 by 6 metres, is part of a national campaign by the Italian atheist and agnostic rationalist association the UAAR called ‘Senza D’, or ‘Without D’, D being short for 'Dio' (God).

Emblazoned with the word ‘Dio’ with the ‘D’ crossed out against a bright yellow background, the poster bears the slogan: '10 million Italians lead a good life without God and when they are discriminated against, the UAAR is at their side.'

Valter Boero, President of the Movimento per la vita (Pro-life movement) told the paper he found the posters "disturbing".

“Thanks to Pope Francis, this is a particular moment for a bridge between believers and non-believers," said Boero. "The message of the ‘Senza D’ campaign seems a bit strong and definitely provocative.”

'There are millions of us'

Defending the campaign, UAAR representative Daniele De Giorgis told the paper: “We live in a country where calling yourself an atheist is a problem. We have a secular ethic, and we get on fine like this, without God; without the idea of an entity that tells us our [life] path. There are millions of us.

“We’re fighting for the secularism of institutions and we are in favour of a State that is free from the Vatican. Turin is a place that is capable of understanding our battle. For example, it’s the Italian city where we have collected the most signatures – 6,000 – in favour of euthanasia and living wills."