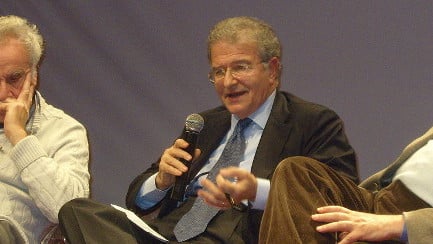 Fabrizio Cicchitto, a senior MP from Berlusconi's People of Freedom (PDL) party, is against the bid to topple the government. Photo: FreddyBallo/Wikicommons

"Making the government fall would be a mistake," Fabrizio Cicchitto, a senior member of parliament from Berlusconi's People of Freedom (PDL) party, was quoted as saying by the La Repubblica daily.

Cicchitto said any new government formed would be "hostile to the PDL" and would be a boon for Letta's centre-left Democratic Party, while elections in
November would be "impractical".

The 77-year-old Berlusconi on Saturday announced he was withdrawing his party's five ministers from the fragile coalition presided by Letta, who said it was a "crazy and irresponsible" act.

He mentioned the possibility of breaking from the party and establishing a new independent group of former Berlusconi lawmakers in parliament that would work together with Letta, the reports said.

Alfano has already said he could be "pro-Berlusconi in a different way" and other ministers have spoken out against the decision to make them resign, apparently taken without consulting them.

Media reports spoke of a possible 20 senators willing to break with Berlusconi, which would give Letta a majority in Wednesday's confidence vote even without the bulk of Berlusconi lawmakers.

Investors meanwhile appeared increasingly confident that Letta's government would not fall, with stock markets rebounding by 0.93 percent on Tuesday after closing 1.2 percent lower on Monday.

Italy's borrowing costs on 10-year-government bonds however rose to 4.580 percent from a 4.431 percent on Monday after analysts warned Italy's fiscal targets for the year could be at risk.

"Political paralysis in Rome could potentially cause a new wave of euro crisis," he said, adding however that this would be "a modest hiccup, and not a new full-blown crisis across the eurozone".

Italy's latest Berlusconi-linked crisis comes just as the country was hoping to shake off two years of a devastating recession and sent shockwaves through eurozone financial markets on Monday.

The dangers were underscored with new data released on Tuesday that showed the unemployment rate had gone back up to its highest ever level of 12.2 percent in August from 12.1 percent in July.

In a meeting with top party members on Monday, Berlusconi appealed for unity in the party, saying: "We wash our dirty linen at home".

He also appeared to backtrack slightly by saying he was ready to give the government more time to abolish a property tax, avert an increase in the VAT sales tax and approve next year's budget.

Stefano Folli, a columnist for business daily Il Sole 24 Ore, said Berlusconi appeared to be veering between hardline and moderate positions on the government "without a compass".

Writing for La Stampa daily, columnist Michele Brambilla said: "It's not just Berlusconi's leadership that is in play and who might or might not dare to dissent with him – Italy is at play."