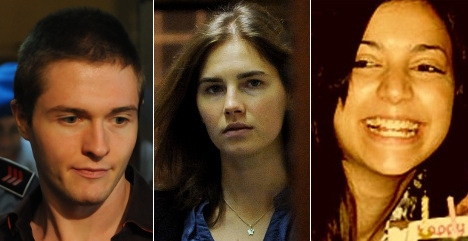 The court in Florence also said it would re-hear the testimony of Luciano Aviello, a jailed mafia turncoat who at one point had accused his own brother of the grisly murder but then retracted.

Lawyers for the US student and her Italian former lover Raffaele Sollecito told the court the fresh tests were essential in clearing the defendants, as the victim's lawyer said the truth behind one of Italy's most notorious crimes was long overdue.

Knox and Sollecito spent four years behind bars for the murder of Meredith Kercher, who was found in a pool of blood in the house she shared with Knox in 2007, her body riddled with stab wounds.

An appeals court overturned their convictions in 2011 and Knox quickly returned to Seattle, but Italy's Supreme Court in March ordered a retrial following an appeal by prosecutors against what they slammed a "superficial ruling."

The knife, recovered from a kitchen drawer in Sollecito's house, bore tiny traces of Knox's DNA on the handle, and Meredith's DNA on the blade.

A third DNA trace had gone unexamined because it was seen as too low to produce conclusive results but the defence hopes it could help clear the pair.

Kercher was found naked apart from a t-shirt.

Her throat had been slit and she suffered a "slow, agonising" death, according to the coroner.

"I hope that we will take a step towards the truth, for the Kercher family. A truth which will finally reveal what really happened," the family's lawyer Francesco Maresca said.

The defence asked for the court to focus on the DNA evidence rather than the witness testimonies, which they said were flawed.

Defence lawyer Giulia Bongiorno ridiculed the idea that a four-way, violent sex game could have taken place in Meredith's bedroom and left behind multiple DNA traces belonging to Guede but no trace of Knox and only one trace of Sollecito.

Sollecito's DNA was found on a bra clasp, which was only collected from the crime scene 47 days after the murder.

Prosecutors insist Knox and Sollecito left no or little DNA behind because they cleaned up after themselves.

"I ask the court to appoint experts to see whether or not it is possible to remove certain traces of DNA from a crime scene and leave others, considering you cannot see naked handprints or skin cells," Bongiorno said.

She insisted the original probe into the murder was flawed – with police caught using dirty gloves to bag evidence and failing to store it properly, allowing for possible DNA contamination.

The mafia turncoat Aviello is set to testify at the next hearing in the retrial on Friday.