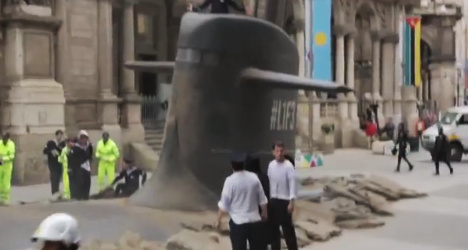 Some onlookers believed the stunt was real. Screengrab:YouTube

Onlookers could only look on helplessly as a giant submarine emblazoned with the hashtag #L1F3 appeared to surface near Milan’s iconic Duomo cathedral on Tuesday morning.

Within minutes, a visibly baffled captain emerged from the top of the submarine to give an interview to a waiting camera crew in a strong Russian accent (see below).

To add to the chaos, an actor posing as a disgruntled Milanese motorist in the wrong place at the wrong time then got out of his smart car to confront the captain while he was still talking to the camera crew.

After much speculation on social media, with some onlookers believing the stunt to be real, it emerged that it was all part of an elaborate marketing campaign by Europ Assistance IT, an Italy-based insurance group for their ‘ProtectYourLife’ campaign.

“It’s called a ‘wow’ experience,” marketing manager Alberto Agnelli explained to Il Giornale newspaper. “We created this scene to make [people] feel emotion through a new energy of communication. No more sickening adverts that show brand names, but people themselves involved in an event, who are conveying a brand name out loud and on social networks.”

“We’ve been working on this project since July,” Edoardo Lugari, the director of the publicity stunt told the paper, adding, “Milan is a fantastic city to acknowledge this kind of creative spirit.”

And it would appear that the company got exactly the kind of attention it was hoping for. Within hours, videos of the publicity stunt had gone viral on YouTube, with one clocking up over 100,000 views.

Second only to Pope Francis – who in July was named the most influential world leader on Twitter – the submarine was the most tweeted about subject in Italy on Tuesday, according to Lugari.

See below to see the official campaign videos showing the submarine apparently crashing through the street followed by the staged interview with the captain.