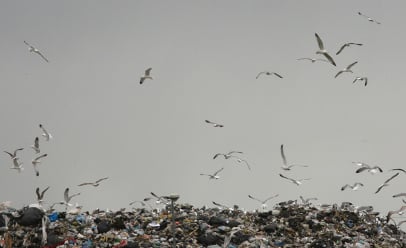 An illegal rubbish dump close to the village of Caserta in Campania. Photo: Mario Laporta/AFP

Pellegrini, who won a gold medal at the Beijing Olympics in 2008, has joined TV host Rosario Fiorello and Milan chef Davide Oldani to support 57 local communities fighting to stop the pollution of their land.

Catholic priest Father Maurizio Patriciello told The Local on Thursday that despite vocal opposition in the past few years, toxic waste from the north of Italy was still being dumped and burnt in a broad region north of Naples.

Patriciello, whose parish of San Paolo is in the town of Caivano just north of Naples, addressed a Senate committee in Rome on Thursday urging it to stop what he called “criminal behaviour” by the Naples Camorra and demanding compensation for those who have suffered from tumors and other health problems.

On Friday, he and other local leaders will stage a community protest to highlight the high mortality rates and other pressing health issues in the region.

“People are dying from their suffering,” Patriciello told The Local. “We are asking for compensation but the politicians’ eyes are closed.”

He said mortality rates had risen 300 percent between 2008 and 2012 and called for doctors to line up and publicly support their patients.

On his Facebook page, Patriciello condemned those criminals who were getting rich on the misfortune and ill-health of others.

“They don’t believe in anything. Their house will be tombs forever,” he said. “History will condemn them. Their children will be shamed.”

According to Italian media reports, there have been more than 6,000 fires to destroy toxic waste in the Campania region in the past 18 months and 57 communities have been seriously polluted since 2001.

Members of the Camorra reportedly dump the waste by day and burn it at night, releasing toxic fumes across a broad area stretching as far as Caserta, 40 kms north of Naples.