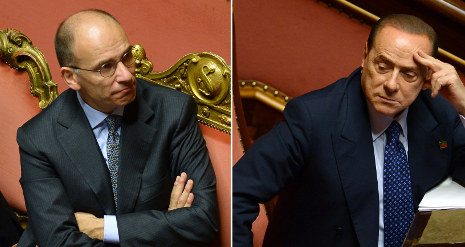 "The political turbulence over the past week highlights the government's fragility, which can delay fiscal and structural reforms," said Francesco
Meucci from Moody's rating agency.

"Such delays would jeopardise the country's economic recovery," he said in a statement.

But he added: "We will see if that is enough to do the things they have to do."

The eurozone's third largest economy edged back from the brink of political chaos Wednesday when Berlusconi pledged to back Letta in a parliamentary confidence vote, just four days after sparking a crisis by pulling his support.

"The crisis is still upon us," Letta warned lawmakers on Wednesday after his victory, as the left-right government he leads struggles to shake off a
two-year economic recession.

"Italy needs an end to blackmail. We have proved the government will not collapse. We need an end to brawls," he said after the dramatic standoff.

Mutinous members of Berlusconi's People of Freedom party (PDL) – led by his protege Angelino Alfano – have voiced dissent and some have outlined
plans to set up their own parliamentary group.

Ageing billionaire Berlusconi has held the centre-right in his grip for 20 years, but the betrayals show he no longer fully controls his party and could
lead to more shake-up soon, experts said.

Simmering tensions between moderates and hardliners have boiled over, with some Berlusconi loyalists likening Alfano's dissent to Brutus's betrayal of Caesar.

"It was a day of tears, regrets, accusations of betrayal, everything that happens when a family falls apart," said La Stampa daily.

Militant Berlusconi loyalist Sandro Bondi was caught yelling in the corridors of parliament: "You want him dead! You want to kill Berlusconi!"

Analysts cautioned that the deep fracture could hit debt-laden Italy's fiscal policy targets and delay approval of the 2014 budget.

Desperately-needed reforms aimed at easing a record jobless rate and social malaise among ordinary Italians may be lost amid the feud.

Financial analyst Christian Schulz from Berenberg warned: "the hardliners will remain in the government, which will not make it easier to agree on
policies. Italy is likely to progressively lag behind the faster-reforming economies."

'Blood in the arena'

The country, which fell prey to the eurozone debt crisis, is suffering the longest downturn since the Second World War and is struggling to meet a public
deficit target of 2.9 percent this year — below the EU-mandated 3.0 percent.

"The confidence vote has bought Letta breathing space, but he must now consolidate support from those in the PDL who are on his side," James Walston, international relations professor at the American University of Rome, said.

Political observers spoke of the beginnings of a new pact between a younger generation of politicians, with 42-year-old Alfano in a potential position to
stake claims on the leadership of the centre-right.

"Despite Berlusconi's energy, his age is significant in terms of his prospects and leadership," the Repubblica daily's editor Ezio Mauro said.

Further shocks are possible within days, even though Letta has stressed that Berlusconi's legal woes should not be linked to the government's fate.

Berlusconi is due to learn this month whether the 12-month sentence he received for a tax fraud conviction should be served as house arrest or community service.

Even after that, the road ahead looks rocky. Berlusconi has an upcoming appeal trial against a seven-year jail sentence for having sex with an underage prostitute and abuse of office.

Letta said Italians were tired of "blood in the arena, with politicians who slit each other's throats and then nothing changes".

But the warring looks set to continue, with Berlusconi faithful and rebels set on their differing courses and destined to clash.